An Error is an unplanned surprise that occurs during the execution of the program, the exception has the power to stop the program execution.

In Typescript/JavaScript, we don't have Exception, we call it as an error. Without a doubt, Error stops the execution, but we are more powerful than the exception, so we can handle the exception without stopping the execution of the program.

These errors will occur at execution time, not in compile time. When a run-time error occurs, we can't handle that error. We must change the code to remove the error.

Error are two types (purely based on my assumptions):

Error is the main interface in Typescript; It contains two properties name and message, we don't get this error, we get its child interfaces.
They are :

You might have come across situations where your program got stopped abruptly throwing some error.

Error (recap): Exception is abnormal behavior of the code, or it happens because something is wrong with our code or with our system.

Here, abnormal behavior means something or wrong with our code, something unexpected. For example, the program throws an exception when we try to access a file that is not present in our local system, etc..

try block is nothing but a block which contains a certain code and that certain code may or may not behave abnormally when the code behaves abnormally, the program throws an exception, but when it behaves normally it will not throw any error.

In layman terms, try block is nothing but a room in the hospital which is little sensitive, and we have patient inside the particular room, when something unexpected happens in that room the hospital will be ready to handle the situation.

In the catch block, the user should mention what is the error that we should handle because we cannot handle all the error as a different error will require different code to handle the situation.

The Catch block will not be executed if there is no error occurs in the try block.

Program for simple try and catch block, here we are trying to print the error details instead of stopping the execution when an error arises.


finally : finally block is also a normal block which contains code but finally block will be executed irrespective of whether an exception occurred or not in the try block

When finally block will not execute :

In below program, the code present in try block will throw an exception, and the catch block will be executed, then finally block gets executed.

Program for try block without a catch block

The Compiler decides to which catch block should be executed if the exception mentioned in the Catch block and the actual exception raised are matches.

In the below code, inner try block throws NoSuchElementException, and we have catch block with the same exception to handle the exception, then finally block of the inner try will be executed.

We can write the nested try catch block inside catch and finally blocks as well.

So whenever we write a nested try-catch block, the inner catch block always will have more than one catch block by default.

So far, we are trying to catch and handle the errors. Before you can catch an error, some code somewhere must throw an error

Any code can throw an error: your code, code from a package written by someone else such as the packages that come with the Typescript.

Regardless of what/who throws the error, it's always thrown using a throw statement.

The below program throws an error with some reason; we can throw any error using throw keyword.

The Value selected or not in a dropdown.

Karthiq, we have tried all the above-said bullshit, but none of it seems working; are you thinking so ?. Then you are in the right part of the page.

You have a block of code that throws an error, You have tried putting it inside a try..catch block, but it still does not get caught.

What is asynchronous code :

Asynchronous error is uncatchable with try..catch block, and this error will propagate all the way and terminate the program.

I hope you do remember that :

Protractor works Asynchronously and provides promise when you want to retrieve the value. Similar to this all the errors in the protractor are promises containing errors.

To handle a promise, we have to resolve it, and then we have to check whether it is a promise with value or exception.

The syntax for handling protractor errors:

In the above image, I have used the then(null, function(err){, let me explain this.

But if the operation is failed then that operation return error, that is what we are trying to retrieve in the then block, so when there error we will get it with then(null, function(err){, now err caught the error and its details.

We can retrieve the error and its details from the err variable, and we can perform any operation we want to perform.

The Obvious question Now you might have got some question, karthiq it is okay for clicking an element as it returns nothing but How would I work with function which returns promises and values like getAttribute(), getText(), getCssValue().

So we have to get the values from the function using another then block, which is normal then block.

The aria-label is used for accessibility purpose

Oh My God, what happens when there is an exception with the above syntax.

Damn, that is the problem, whether there is an error or not the last then block will be executed.

So let's create a flag in our test that when there is an error, we should set the flag to false, with which we can control using the if block 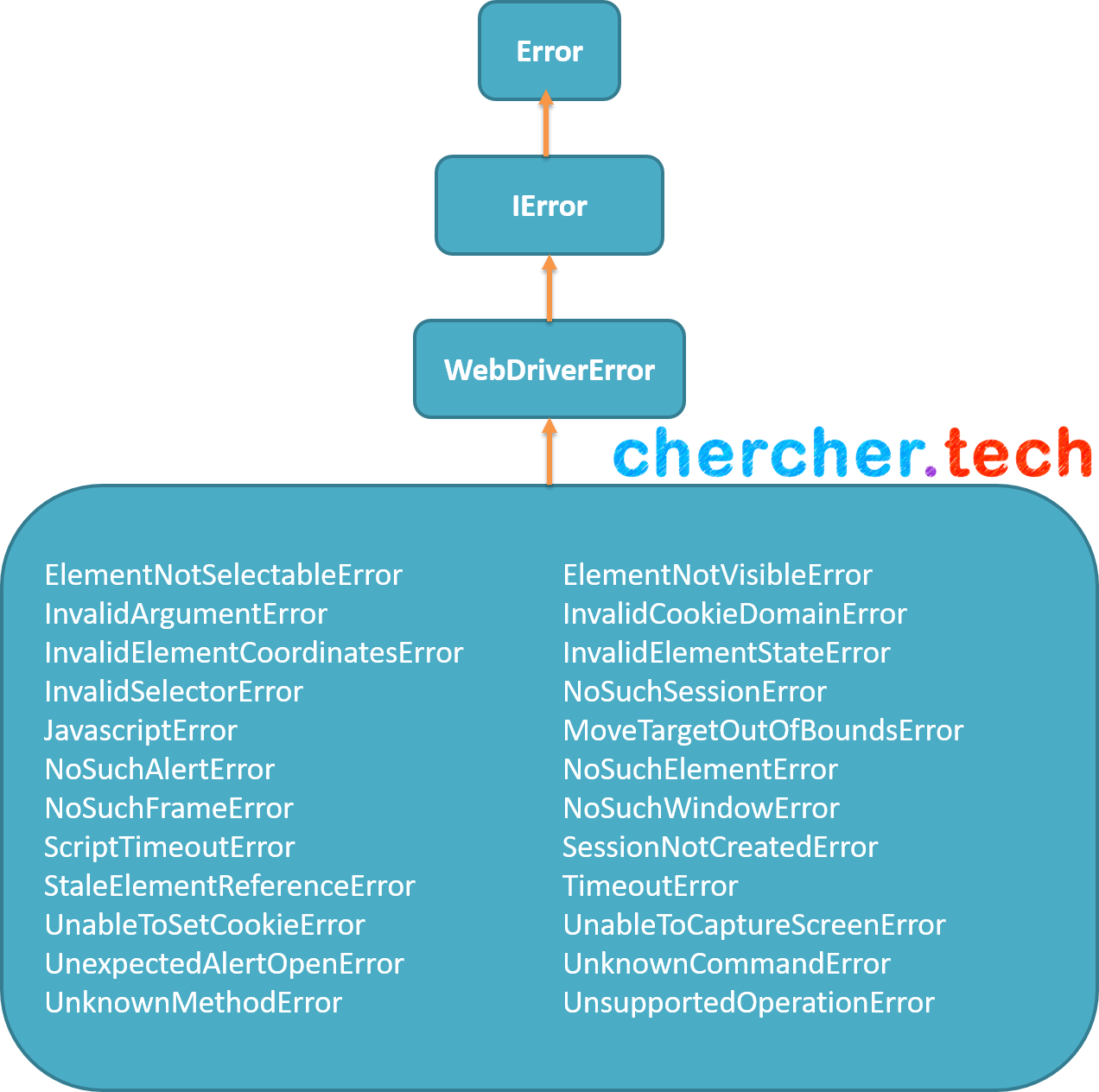 In this tutorial, I have given a sample code which causes the error, that does not mean only this piece of code will raise an error. Other commands also can raise errors

Protractor throws NoSuchElementError when there is no matching element present on the webpage.

Reasons : NoSuchElementError occurs because of one of the below reasons

Code which causes the NoSuchElementError :

Protractor throws NoSuchWindowError when a user tries to switch to or perform an operation on browser windows when the window is not present.

Reasons : NoSuchWindowError occurs because of one of the below reasons

Code which causes the NoSuchWindowError :

NoSuchFrameError happens when a user tries to switch to a frame that is not present at the time.

Reasons : NoSuchFrameError occurs because of one of the below reasons

Code which causes the NoSuchFrameError :

Protractor throws NoAlertPresentError error when a user tries to access an alert popup, which is currently not present.

Reasons : NoAlertPresentError occurs because of one of the below reasons

Code which causes the NoAlertPresentError :

TimeoutError is related with explicitwait, fluentwait, pageLoadTimeOut, scriptLoadTimeout. The protractor throws the TimeoutError error when the user has defined the wait time, but the elements has not been found within the wait time.

Reasons : TimeoutError occurs because of one of the below reasons

Code which causes the TimeoutError :

1. When we try to take a screenshot in the headless browser(phantomjs, htmlunitdriver) without enabling the screenshot functionality.


Code which causes the ScreenshotError :

Insight : User can use getAlertText method to get the text from the alert when UnhandledAlertError error occurs.

UnReachableBrowserError will be thrown when protractor is not able to connect to the browser after starting the browser.
Reasons :

Note : IEDriver32.exe can be used in place of IEdriver64.exe but vice versa is not possible

Protractor throws this error when protractor is not able to connect to the browser session, this error occurs mostly on Chromedriver
Reasons :

protractor throws MoveTargetOutOfBoundsError when the user tries to move/drag the element or the cursor outside the visible screen.
Reasons :

1. Change of screen size ( test cases are written in desktop but current execution is happening laptop, considering that desktop screen size is bigger)


Code which causes the MoveTargetOutOfBoundsError :

Protractor throws InvalidElementStateError when user tries to perform operation on a Webelement whose state is disabled.

Subclasses of this Error gives detail explanations, the subclasses are ElementNotInteractableError, ElementNotSelectableError

1. When element state is disabled


Code which causes the InvalidElementStateError :


Code which causes the ElementNotInteractableError :

Protractor throws ElementNotVisibleError when user tries to perform an operation on an web element, which is present in the page but the element is currently not visible.
Reasons :


Code which causes the ElementNotVisibleError :

Indicates that a click could not be properly executed because the target element was obscured in some way, I never faced this error in my testing life.

Protractor has methods, which gives a call to native methods present in the browser and browser reacts to the native commands. Recent times we have received updates for a driver like geckodriver.exe and chromedriver.exe.

Protractor throws InvalidCoordinatesError when the user tries to move the mouse to a co-ordinate which is not valid using action class methods.
Reasons :

1. When we run our test in different size of monitors, we may face this issue.

This indicates that activating an IME engine has failed.

Error used as a place holder if the server returns an error without a stack trace.

Protractor throws InvalidCookieDomainError when a user attempts to add a cookie under a different domain (URL) than the current URL.

We can open a browser with certain options using profiles, sometime new version of Protractor driverserver or browser version may not support the profiles, during such cases UnableToCreateProfileError raises.

Protractor throws UnableToSetCookieError when a driver fails to set a cookie.