It has been a few years since Industry 3.0 has started which means complete Automation and digitalization.

For years Selenium was used as the testing tool. Now a new era has evolved which reduced the hectic process of testing for the QA engineers and developers.

Cypress has been introduced as a solution for the front end testing which is successfully running in the real-time process.

Cypress is the new automation testing tool that can be easily handled to run, write, test, and debug the tests. Cypress team quoted a cool statement,

"Testing has been broken for too long, We figured it was time to fix it".

Nearly 176 organizations like NASA, Revolut, CircleCI,etc., is depending on Cypress for the End-End testing, Integrated testing, and unit testing. We can say that Cypress will be ruling the testing phase for a few more years.

While performing the tests in Selenium we have to often download the additional library files, selenium wrapper, framework, assertion library which are the dependencies. But in Cypress, all the required files will get automatically downloaded once you install with the command

Additionally, you can use all the cool features of Cypress if you have an updated Node.js. In real-time, the Cypress has full control in the back and front end because it constantly communicates and synchronizes with the node.js.

Cypress controls the network traffic by automatically changing the code associated with the browser. It also links with the OS of the PC for better automation purposes.

By using Cypress you can monitor the test result internally and externally, record the test, screenshot the test result, and so on. Cool isn't it?. Let's discuss the cool features of Cypress after installing this tool.

Since Cypress is associated with node.js, it supports any type of Operating System.

Cypress can be installed only if you have node.js installed in your Windows or macOS.

Installation of VS Code:

We need a platform to write our code. Visual Studio code platform is one of the most popular editors created by Microsoft to write the javascript.

If you have completed these steps then you have the Cypress tool in your Operating System.

Extraction and Launching of the Cypress Test runner

After the successful installation of cypress, we have to invoke the Test runner. 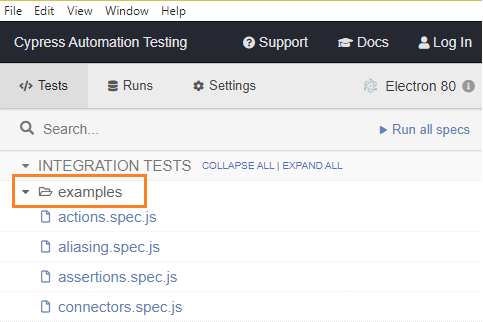 Now let's try to run any one of the test programs in the examples folder and understand how the automation works.

Now we are going to learn about the purpose of some Cypress folder which is automatically created in the VS Code in the Explorer section. The explorer will look like the below image in the VS Code, 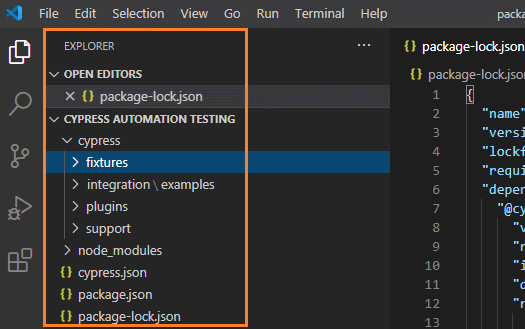 This is how cypress contacts VS code from the test runner. In the next article, we can technically learn from scratch how does Cypress work with some test programs.