Cypress Asynchronous nature and its promise handling in CypressIO

Any tool which is based on node.js is asynchronous i.e build by javascript. Let us understand the difference between synchronous and asynchronous.

In general, It seems like cypress executes sequentially but it is not. Internally the cypress is handled synchronously with the help of promises by queuing the commands.

We need not worry about the concepts of synchronous and asynchronous nature because it is completely taken care of by the cypress. It makes sure the commands execute sequentially.

In asynchronous, every step returns promises. Promise is like a kid's promise that the kid will say "I will give you the toy" but we never know when it will give the toy.

There are three states of promises they are,

Example program: To know about the state of the promise, we have to include the then() method in each step.

If we include the then() method in each step the program becomes clumsy. In order to overcome it, cypress internally executes every step with the then() command even without giving the command in each step.

Basically, the cypress wraps and hides the promises from the user view to make the program more readable. In this way asynchronous execution becomes synchronous.

Cypress and its commands are always asynchronous. Promises are handled internally by cypress for the cypress concepts and commands.

There are a few cases where we should manually handle the promises. When we manipulate the basic cypress behavior, the cypress gets confused and won't create promises internally for the entire code.

Let us understand a program where we should manually concatenate the then() method.

The above program is logically correct but the program manipulates the cypress behavior since the text() method is a jquery method. So promises are not created internally and in the output, an error occurs as below, 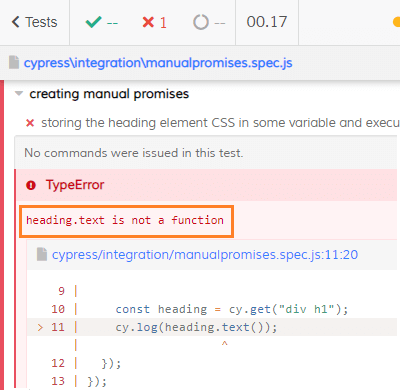 In order to overcome the above error, promises should be created manually by using the then() method.

Example program: For the manual resolving of cypress, the program should be redefined as follows,