The Apache JMeter application is open-source software, a 100% pure Java application designed to load functional test behavior and measure performance. It was originally designed for testing Web Applications but has since expanded to other test functions.

Stefano Mazzocchi of the Apache Software Foundation was the original developer of JMeter. He wrote it primarily to test the performance of Apache JServ (now called as Apache Tomcat project). Apache later redesigned JMeter to enhance the GUI and to add functional testing capabilities.

JMeter is a Java desktop application with a graphical interface that uses the Swing graphical API. It can, therefore, run on any environment/workstation that accepts a Java virtual machine, for example − Windows, Linux, Mac, etc.

The protocols supported by JMeter are :

Different kind of Testings in brief:

JMeter simulates a group of users sending requests to a target server, and returns statistics that show the performance/functionality of the target server/application via tables, graphs, etc.

Take a look at the following figure that depicts how JMeter works: 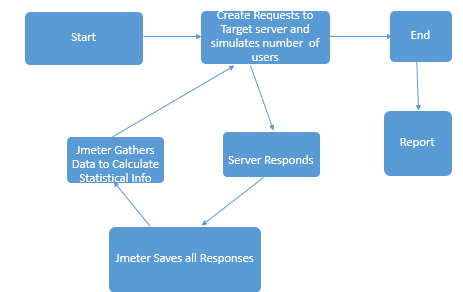