White box testing is a software testing technique where, the internal structure, design, coding and all the events are tested. As the name says, white box, which means whatever in the box that is, the software is visible to the tester.

This testing technique deals with the verification of how the flow of the input leads to the output. With the analysis of the data path through the functions or the modules, it also focuses on strengthing the security, improving the usability and furnishing the design of the software. Before we proceed in this article, it is important to know, that what are the different sections or modules on which the white box testing is going to be performed. Those are listed below:

It should be noted that this testing, can be done in different levels of software developments. This testing can be carried out taken the system into the account as a whole to test.

Also, it may be carried out in a very smaller level like the unit testing, or the integration testing which is comparatively higher. This testing is direct, carried out on the statement, codes or the function module itself. And the actual output is compared with the expected output.

The Process of White box Testing

Below is a diagram which shows the representative diagram of the white box testing: 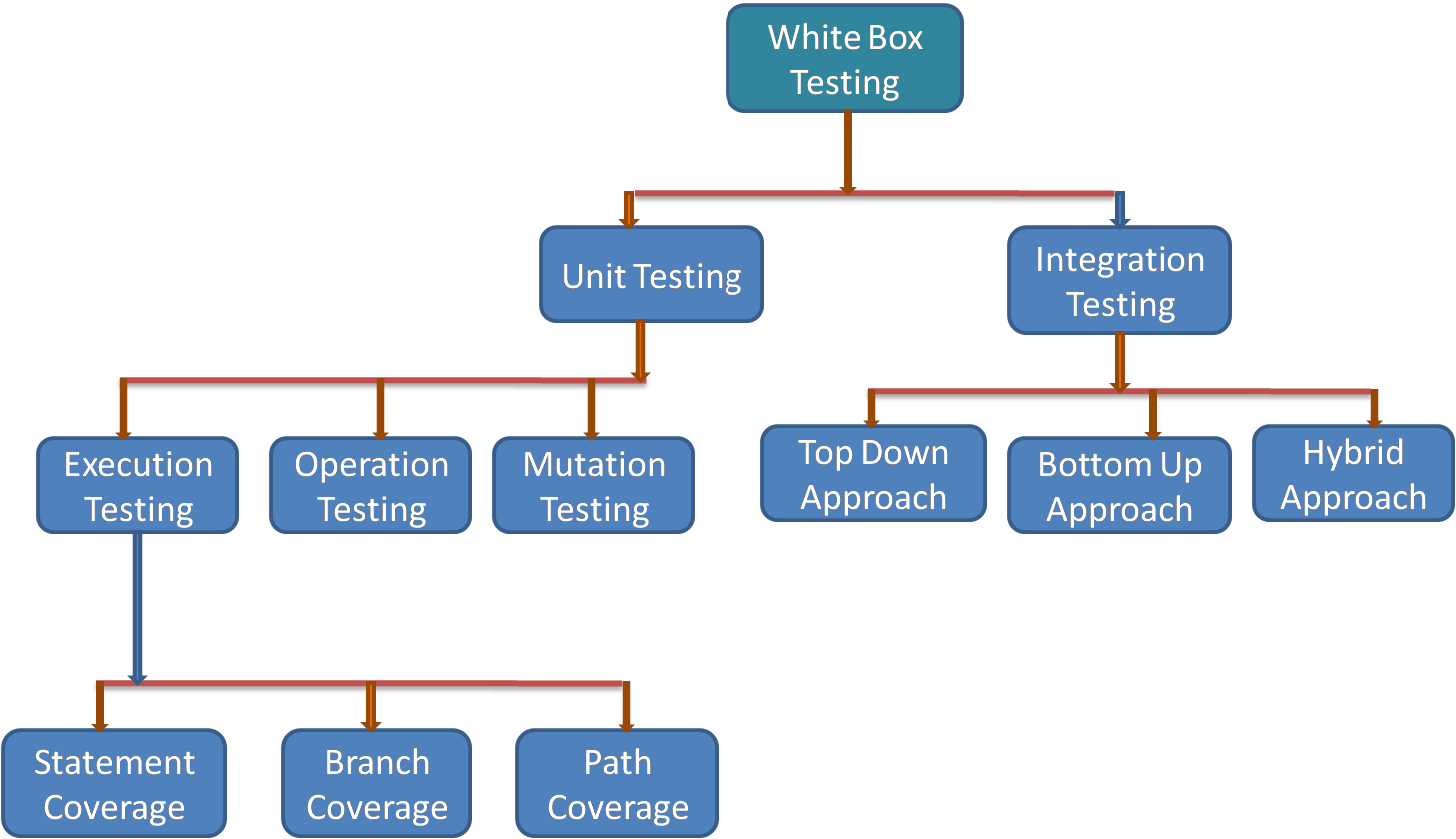 As shown in the above diagram, white box testing can be divided into two types. One is the Unit testing and the other is the integration testing.

And the integration testing divided into the top-down approach, bottom-up approach and hybrid approach.

Unit Testing is the process of testing a module, at a time. In this testing, one unit, that is the smallest functional unit of the software is tested at a time. To perform a unit test, unit test cases are developed and is performed by the developer or the tester who has good command over programming.

As shown in the diagram unit test can be further divided into three different types. They are:

Execution Testing is the process of directly executing the code and compare the output to the expected result. To carry out this kind of testing, the tester must have good knowledge of coding or programming and the test case must be developed after a thorough study of the codes.

This testing can be further classified into three different types:

The test case must be designed in such a way, that all the multiple blocks also get a chance to execute at least once.

This test only assures that all the statement is covered just once, but does not lay emphasis on the different conditions on when the statement gets executed.

It should be noted that a similar statement may execute differently and have different outputs based on different conditions. But, this is not a concern in statement coverage.

In this test, we are concern whether all the branches are covered while performing the test. It is almost the same as that of the statement coverage also.

The only difference is that in statement coverage all statement has to be covered at least once, on the other hand, in branch coverage, the output of all the branch is checked whether returning true or false, but both should be reached.

In this test, it is checked whether all the paths are covered at least once. This is mainly a detailed task to test how a function performed as the data flows from it. It mainly checks from the function start to the exit point.

It is important to note that, both the concept of statement testing and the branch coverage is performed in this testing technique. The test cases for this technique is also, designed in such a way that it traverses all loops and reach up to the final output covering all the statements.

Operational testing is the process of testing mainly the non-functional elements of the unit modules. The non-functional attributes may include, performance, efficiency, load balancing capacity, resource usability, network, security, etc.

Mutation testing is a very different kind of testing. In mutation testing, we intentionally, change some of the codes and replace it with a different statement or code, which is very hard to identify when the system runs as a whole.

And then the test case is applied in these modified units, and it is observed whether the test cases are able to detect those error which is induced intentionally.

In this technique, our next important goal is to break the code block into smaller parts, so that is can be integrated after removing the redundancy.

What is Beta Testing?

There are three approaches for performing the integration testing:

Then when the testing is brought at the lower level, then it is checked how the smaller aggregate functions are working.

Then testing is carried at the unit levels which is also called the root or the leaf level of the software.

In this type of testing, the modules at the lower levels are tested at first, if the result comes satisfactory, then only the test is made to be carried out at a higher level. At last, the testing is carried out at the topmost level which is somewhat similar to the system testing.

It may be noted that, in this testing technique, modules or units in one level is tested at a time. And modules of one level is not mixed with the modules of a different level, while the testing is carried out.

In this type of integration testing, modules or units of one level may be tested with a different module which belongs to a different level. The hybrid approach is the most used approach, as there may be some functional dependencies between the functions, which may be important and must be tested.

This testing ensures that all the modules or functions which are interlinked with each other are testing is the same way as if they are in the real working environment. This helps to understand the product output better.

What is a Software Testing Metric?

Some method for Agile Testing

What is volume Testing?

White box testing is a software testing type in which the internal codes, programs, architecture and structure of the software is tested.