Rust mainly focuses on safety, safe concurrency, and syntactically partially similar to C++ language, which is a multi-purpose object-oriented language.

Rust is also designed to provide better memory safety compared to other programming languages of object-oriented type. When we talk about memory safety, it means, that it does not permit null pointers, dangling pointers or data races in safe codes.

Through a fixed set of forms(which requires their input to be initialized), the data values are initialized.

In cases of data structures such as a linked list or binary tree, the function can be replicated in some other language of pointers. To check whether the pointer is valid or Null, the Rust core Library provides an option type which can be used to test whether the pointer has some values or is a Null pointer.

Things to know about Rust.

Of course, almost everyone visiting this article is aware of the importance and beauty of programming. But standing in an unbiased manner for newcomers, we mention below some strict points about why programming.

Installing And Getting Started with Rust

There are not many steps involved while getting started with Rust Programming. It is an open source software, can be download from the internet and can be used. We are discussing the installation in Windows OS.

Below are the steps to install Rust

and navigate to the install option.

After clicking the install button, you should see the RUSTUP.INIT.exe file on the next page.

Click on the file highlighted in the image and get the software downloaded into the system. It will take a maximum of 2 minutes.

To install the software, just open the software and click it, and you must see the below window popping up.

After hitting run, the below window with the command prompt open up.

Now we can close the command prompt and go to the .cargo folder to see our installed files and packages. 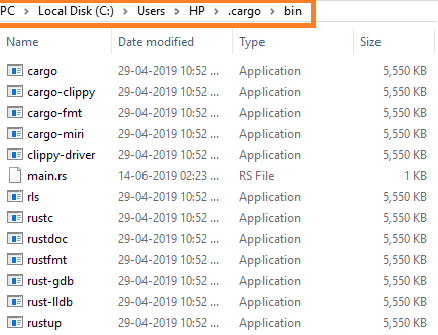 To create a new package, we open our command prompt and type:

As we created the package called my_first_rust_program, inside it, a folder called src has been created and a default program file called main.rs is created, which contains our first hello-world! program of Rust.

To do this, change the directory to src folder in the command prompt.

Now, to run the main.rs inside the src folder, we first need to compile the file and then run the file. To compile, we have to use the keyword rustc and then the program file name.

After the compilation, an executable file called main.exe is created inside the same folder. So, to execute that, we type: main and hit enter.

And get our first program executed! Cheers!

Some probable problems while compiling rust

There are different kinds of problems that may arise while compiling Rust. Such as: Missing Dependencies Problems, MSVC linker problems or C++ Redistributable modules missing problems.

If any of these error persists, then while compiling, the errors would appear and compilation will be aborted.

All these problems can be sorted out by installing the Visual C++ Redistributable packages into our Windows PC.

After the successful installation of the packages, the error which was showing while compiling should eliminate and our Rust program should compile.

Since, Rust has a lot of properties inherited from C++. Therefore, the comparison between Rust and C++ has to be done, so that, it can be well understood that, what are the improvements that are made in the Rust. And also what are properties which lack in the Rust.

Rust inherits its properties from different languages which are itself stronger. Such as the, C, C++, Haskell, Cyclone, OCaml, and ML.

When Rust was developed, the main intention was to create a language which can run on a different platform and also can be executed in various computational methods.

It cannot be said whether Rust is superior or inferior to C or C++ or Haskell or Cyclone, but it's sure that the scope of Rust is much larger than those languages.

“Everybody should learn to program a computer, because it teaches you how to think”