Control flow in Rust programming means, which path the program execution follows. This can be based on different decisions. When a particular decision is fulfilled, then certain blocks of code get executed. There can be different ways through which the program control can flow. They are:

if Conditions with rust

There can be four different types of if statement. They are as below:

if condition in rust

The Syntax for if:

Below example demonstrate whether a person can vote or not, based on the Age, using if statement in Rust:

Nested if Conditions with rust:

There can also be if condition, inside another if. In such cases, it is called nested if. Nested if is required when we have to check more then one decision to check and conclude a result or run a block of code.

Program to check whether a number is odd and divisible by 3.

In our case, the number is 5. Therefore, the first condition is satisfied, but the next condition is not satisfied, resulting in the program flow to go out of the if scope and print nothing.

Let us now see the case, when both the if decisions become true.

In this program we have assigned the number to 9. Now the first condition(whether odd) is true. And also, the second condition (whether divisible by 3) is true. Therefore, the code inside the nested if(second if) gets executed.

if else condition in rust:

The syntax for if-else in Rust:

Example Program: (When the decision returns true) if check_value > 100

As we have seen in the program output, since the decision is checked and is found true, and thus only the if part has been executed and the else part is not executed. This way the program flow depends on the decision.

Example Program : (When the decision returns false) if check_value < 100

There can be else block inside another else block. This way of using else is called nested else.

Sometimes we want to take a decision in else block as well when we have more than one options, In such cases, we can use if..else..if block.

if ..else if..else (Handling Multiple Decisions) :

The first decision is taken in if. When the condition is false in the if block, then else block is executed. We have one more decision to take in the else block. So, that is why, we have used if block along with else block. We can have as many as else-if blocks required.

Note: Once the condition is reached, the execution stopped there and did not check for , which could also, in turn, return .

Loop is a single or a set statements which gets executed repeatedly until and unless a certain condition is reached which will terminate the loop.

Loop is also called an iteration because a set of similar statements gets executed again and again. Loops can be broadly classified as:

Pictorial Representation of a LOOP : 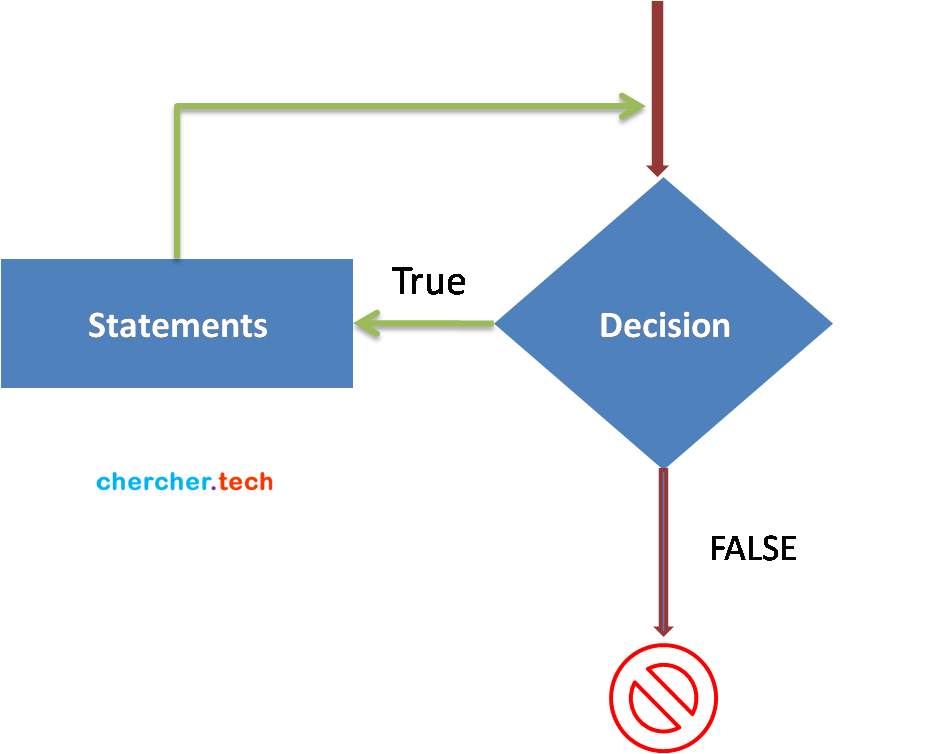 Loops can be classified into three different types. They are:

A for Loop, is used to execute a block of code multiple times.

In the For Loop for keyword indicates the for-loop, followed by the variable_name and the keyword in, and then writing the expression.

The scope of the for-loop will start with an opening brace { and ends with a closing brace }. And inside these brackets, resides the code which we want to get executed repeatedly.

An expression is nothing, but a limit which indicates where the loops start and where it ends.

Program to print a line using for loop :

In the above program, inside the main() function, we have declared a for-loop using the keyword for. counter is the loop variable, and in is the keyword required. 0..10 is the expression indicating that the variable value starts with 0 and ends with 10.

In the above output, we have seen that the counter value starts with 0 and increments up to 9 till the loop ends. (counter value = 10, is the termination condition for the loop, as it is mentioned has the higher limit in the expression).

A for loop can be used using the keyword continue. This is used when the loop has to be continued only just skipping the iteration for which the if condition satisfies.

This is done by writing the continue; statement after the conditional expression of if.

In this way, we can skip particular iterations, but still, the loop will continue up to its higher limit.

while loops are used when the user is not sure, about how many times the loop should get executed or how many time the iteration should go on.

The while loop, should be followed with a boolean variable(which can be either false or true), and there should be an if condition which must stop the while iteration.

Then the scope of while starts with the while keyword followed by the boolean variable, which is set to false. Inside the scope of the while, the codes are written which need to gets executed. In our case, we are incrementing the value of the variable value by 3 and then printing the value after each increment.

Then we have the if statement which checks for the condition, whether the value is divisible by 5. If the condition turns out to be TRUE, then the bool_variable inside the if, is set to TRUE and the loop is terminated.

20, the last value is printed, which should not have been printed, since it is divisible by 5 and so turns the bool_variable into TRUE. But, it is printed, it is so because the print statement is earlier of the if statement.

The while loop can be terminated only when the if condition returns a TRUE or FALSE and the boolean variable is changed.

We can also set a loop, where there is no need to use the boolean variable. And only using a keyword break, the loop can be terminated.

In the above program, loop is the keyword to start the scope of the Loop. Inside the loop we have a statement value= value + 3 which increments the value by 3 each time the code is iterated by the loop.

Then we use the macro println!() to print the value of value each time the loop gets iterated. After the if followed by the conditional expression, we have used break; to stop the iteration.