Variables are used to store values, that can be referred to by other elements. Variables can also be used in test cases and user-defined keywords.

There are three types of variables in the robot framework

A Scalar variable holds a single value at a time, and it is a single component that assumes the range of numbers.

The Scalar variable is used to store the Strings, Objects, List, etc..

The syntax for the scalar variable is

Let us know how to create a scalar variable and make use of it.

In the Features Of Ride article, we have created a First Test Case, let us create a scalar variable by using the below command open the Ride Editor

Once you select the new scalar, the below popup will appear on the UI, enter the variable name inside the curly braces ${var}. I gave the value as 4 and we can provide any comment describing why we have this variable, I am passing the comment as This is my first scalar variable and then click ok.

If the scalar variable has created successfully, it will be displayed below the test suite.

I am creating another scalar variable ${var2}

Click on the Run tab on the top of the editor and then select the First Test Case and then click on the Start button.

Suite Demo and test case is as shown below

The List variable will have an array of values, The values in the list are enclosed with the square brackets and separated by a comma.

Let us see how to create a List Variable

Right-click on the test suite(Demo1) and select the new list variable.

Fill the required parts, and here I am giving the name as a user and select the column number as one and then enter two values as jaanu and jhanvi and then click, ok.

You can see list variable displayed below the test suite

Create a test case called the second test case and add an assertion to compare the arguments with the index value. Here we are using assertion Should Not Be Equal As Strings 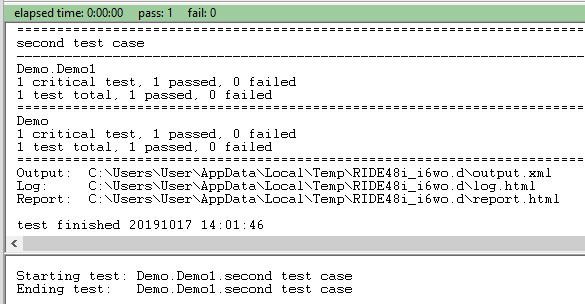 The syntax for the Dictionary variable is: 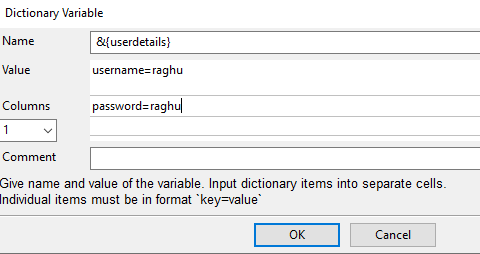 Now, go back to the Third test case and enter the arguments as shown below

Click on the Run tab and then select the Third Test Case and then click on the start button.