The plain text format is the base for all supported robot framework data formats. It can be edit by using the normal text editor and IDE's. Test Data can be parsed line by line. In single-line arguments and keywords are separated by a separator.

The most commonly used separator is space separator

Space separator : Two or more spaces acts as a separator between the two different data items. The minimum spaces should be two.

Let us see how to write the test cases in plain text format. Open the Ride editor and then click on any test case, here I am opening the First Test case.

You can see the three options Edit, Text Edit, and Run, click on the Text Edit to write the test case in the plain text format.

Create another test case in the plain text format as the Fourth test case and selected the keyword as Should Be Equal and pass the arguments as 4 and 4 by giving the two spaces between them. 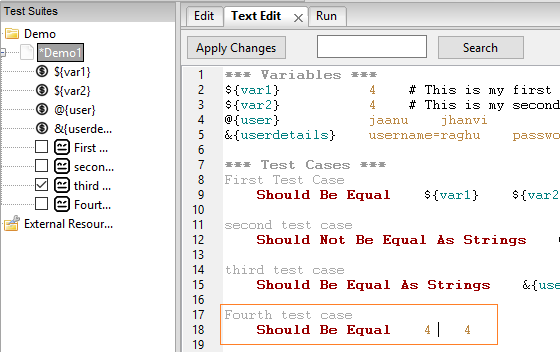 We entered the test case in the text editor, and the same will be reflected in the Editor as well.

The files in the TSV format are typically edited in the spreadsheet programs because the syntax is so simple, and they are easy to generate programmatically. They are pretty easy to edit by using the normal editor, and also they work well in version control.

We can create and edit the TSV files in any spreadsheet program, such as Microsoft Excel. The TSV file containing non-ASCII characters must be saved using UTF-8 encoding.

The files in the TSV format are commonly saved by using the .tsv extension. But starting from the framework 3.1, the --extension is used explicitly to tell that these files should be parsed. We can also save the TSV files with .robot extension, but this requires the files to be fully compatible with the plain text syntax.

The supported text formats are:

reStructured Text format: it is easy to read plain text markup syntax that is commonly used for documentation of python projects.

The reStructured documents are most often compiled to HTML, but still, other output formats are supported.

Following are the Built-in Library Keywords

YAML Ain't Markup Language is a data serialization language that matches user’s expectations about data. It is designed to be human-friendly and works perfectly with other programming languages. It is useful to manage data and includes Unicode printable characters.

Example: Consider the text as shown below:

In the YAML markup language, this will be represented as shown below

The yaml takes the value in the string format and represents as shown above.

Suppose, multiple values are to be loaded in a specific data structure as mentioned below

When you load this into YAML, the values are taken in an array data structure which is a form of a list. The output is as shown below