When we are executing the python program in the command line, we have to pass python filename.py. Here along with the file name, we can pass different values to the program, so these values are called command-line arguments.

The argv is List datatype, to understand this, let us consider below example

In the case of command-line arguments in python, the first argument is always the python file name, 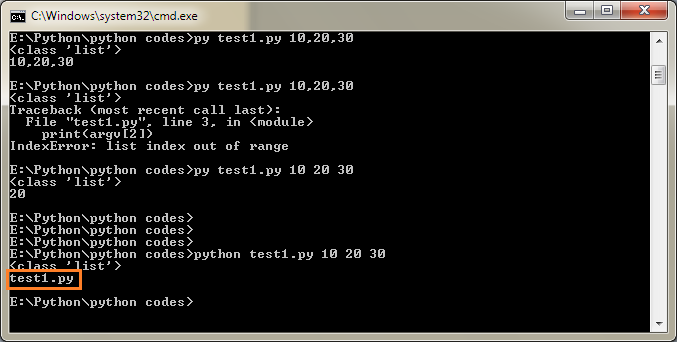 If you print(argv), then python will print all the list of arguments 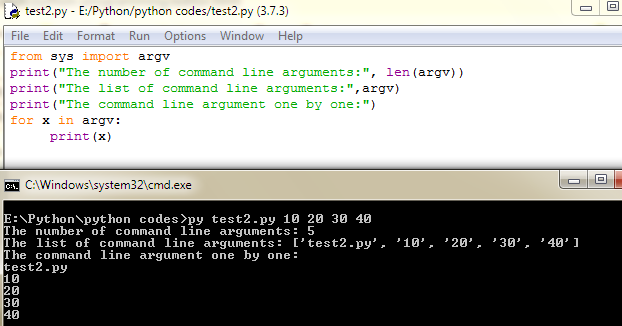 As you know before, by default python is going to consider file name as its first argument, and if we do not want to print the filename as the argument, by using the slicing operator, we can print only the explicitly given values as the arguments.

The following example to demonstrate By using the Slice operator to print the given values as the arguments.

So, let us see how to correct it, instead of taking the only y, perform typecasting to convert the string into int type.

If we execute the above program without passing any arguments, then the sum will be 0.

Space is the separator between the command line arguments if the argument itself contains the space, then it should be enclosed within the double-quotes.

Here, I am going to execute this code through command prompt and passing the argument as king kong.

If you observe, python is considering the king as the first argument and prints the same, and if we want to print king kong as one argument only then we have to enclose this with double-quotes.

And if we use single quotes, then the output will like below

Inside the python program command-line arguments available only in the form of the string, if we try to add two string, then it will result in concatenation operation and hence to overcome this problem we have to convert these string datatype into an int by typecasting

If we try to access the command line argument with out of range argument, then Python will throw an Index error.