Variables are used to store a value in POSTMAN most of the time we will store part of the URL in a variable.

Using this concept of storing a part of the URL in a variable and using it in multiple places can save the time of typing a lengthy URL. Also, this technique can very helpful when you want to make changes in the URL.

Two requests which are inside the collection- Collection01 have the first website link in common; just the request end-points are different. Therefore, the first part can be stored in a variable so that, the variable can be used when the website URL is required.

To open the variable section and click the three dots beside the collection name, and then a dropdown list will appear. Select Edit from the list.

After you select Edit, you should see as below:

Now, click on the variable tab and you will be asked to enter the key, which is the variable name(anything you want). Now, copy the first part of the URL which is common to both of the requests.

In our case, one URL is: https://reqres.in/api/users/2

And another URL is: https://reqres.in/api/users?/page=2

You can see that the URL part https://reqres.in is common to both the above URLs. Therefore, we shall try to store this part of the URL in a variable, and try substituting it inside the POSTMAN software and see whether it works.

To do so, click on the Variables tab and then provide a name to the key(url) and then edit Initial and Current value. And then select the Update button.

After you have named and updated your variable, go to the URL bar and replace the part of the URL with the variable you declared.

In our case, the variable is the url and the syntax contains variable between a pair of braces {{ }}

After successful replacement of the variable, you are ready to go. Now, send the request again and it should work the same way it worked earlier.

Variables in the Environment

Variables can be set in POSTMAN Environment directly. Environment variables will be useful when your application has different environments, Typically software will have below environments:

After you click Add you will get an area to input the variable name, value, etc.

In my case my VARIABLE is url01. The INITIAL VALUE is http://reqres.in/ And the CURRENT VALUE will automatically take the same as that of the INITIAL VALUE.

Now, before adding the variable and values, enter a suitable environment name and then click Add. 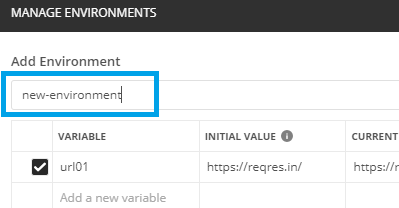 Now, when you add your variable, it is added successfully. Now, go to the request URL bar and replace the part of the URL with the variable name. In my case, the URL part I want to replace is: http://reqres.in/. The variable which must be placed inside a double brace. For example, {{url01}} in the URL.

And then select the Environment as new-environment.

Now, the request should work well and the response should be visible below in the software.

Response from the server :

So, we have seen that how we can set variables in the environment and still the URL runs a similar way.

Appropriate environment(in which the variables are set) should be selected before targetting to send the request. An irrelevant environment will produce an error.

In the previous section we have seen how can we set an environment variable and when the request has to be run, we select the required environment and then send the request to get the response.

Global Variables are used when we create different environments with different requests inside them. But all the request contains a part of the URL which is common to all.

To create Global variables, go to Manage Environment and click .

Then you will get an area to create global variables and set value for them.

I shall create a variable for the URL part- https://reqres.in and will name the variable as cvalue(which I indicate the common value, as this URL part is going to be used in different requests, you can use any name you want).

Now, create any request which requires the URL part- https://reqres.in And then append the required end-point and send the request.

For example, I shall visit the link: https://reqres.in and then select a GET request. I shall Select the List User, which is GET type and copy the request end-point.

Now, go to the URL bar of the request and use the variable cvalue in place of https://reqres.in and then append the request end-point.

Now, select any environment of your choice(does not matter which one you choose), the request will work for all the environment. This is the use of a Global Variable.

Let us select any environment and send the request. First, I shall select the environment myenv.

Then send the request. 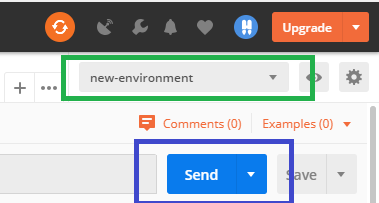 In both cases, I have got the same response. It means, that the global variable is in action and is working the same for different environments.