A Mock Server is a virtual server that can be your own computer or any software which can be used to act like a real server. A Mock server is used during different API testing when various responses have to be received which are not readily available on the web servers or for some testing that cannot be performed on real servers for security issues.

POSTMAN provides a great facility letting you create a Mock Server inside it.

Below are some necessity for creating Mock Servers:

Creating the MOCK Server in POSTMAN

For creating Mock Server in POSTMAN, you don't really need any external extensions or applications, but the Mock server is inbuilt in POSTMAN. Let us see how to use it.

Go to the New button in POSTMAN and you will see the option for Mock Server. 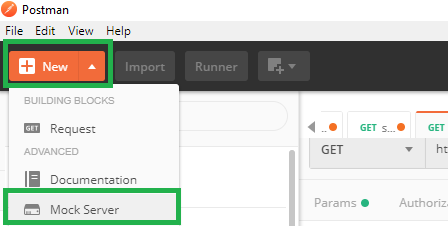 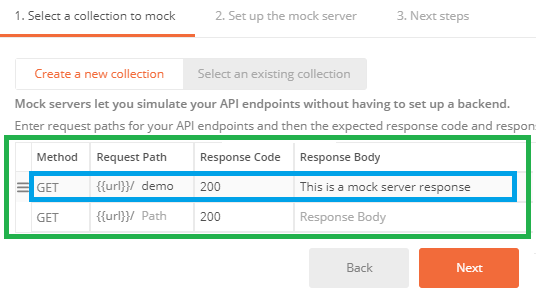 As can you see in the above image, the first column is for the method type. (We selected ). In the next column, the Request Path has to be inserted. ({{url}}/demo). The third column is for the response code(which is 200, which means OK). The fourth is the Response body, this is where we can write our response.

We can write the response text as plain or HTML document, JSON document, etc.

Now hit the Next button. 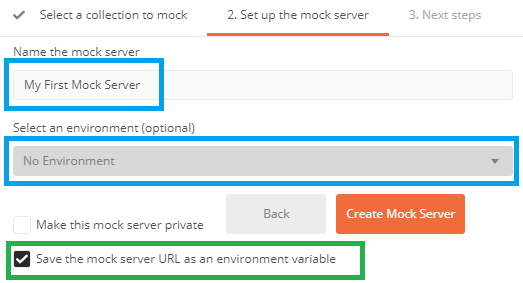 Then click into the Create Mock Server, and your Mock server is created.

Now, on the left side of the POSTMAN interface, your Mock Collection should be displayed along with all other existing collections.

As shown in the above request, you can see that a request has been automatically created by POSTMAN for making requests into the Mock server.

Now, go the Response Section, and you must be able to see the custom response that you created at the time of creating the Mock Server.

Creating a JSON Response in the Mock Server

Let us create a JSON response into the Mock Server. To edit the response, just open the request and then go to the Example in the top right corner of the POSTMAN page.

As you click Examples, you will get a drop-down option called Default. Click into that option and you will be able to edit your response.

As you click into Default option, you will get an area to edit your response. Click into the drop-down menu right to the Preview section in the body section and then select JSON(you can select anyone, but now we are concerned about creating JSON response, so we shall choose JSON response).

After selecting the JSON file, in the body section, write your JSON Response.

Now, hit the save example button and then click to return back.

In the image, the left side button demo, you can return back to the request.

Now, send the request. And wait for some time. Even though the response is made from your local machine through POSTMAN itself, it will take some time to process the request and the response.

As we saw earlier, in the Assertion Chapter, that assertions are nothing but writing test code. The POSTMAN inbuilt code snippets can be used the javascript code can be customized for making different assertions on the Mock Server's Response.

Performing Assertions on the Mock Server's Response is similar to the assertions we make on the Response that we obtain from a distant or remote server(what we call a real server).

Go to the Test Tab of the Request and edit the code below:

Click the send button to send the request again and after the response is received, to the Result tab in the Response section and see the result.

As you can see in the above image, the script for the status code is .

Accessing data from the JSON Response

Any data values from the JSON Response can be obtained by accessing the JSON path for that variable. For example, consider the response below.

Suppose, I have to access the value inside the title, so the access path should be data[0].attrubutes.title.

Edit the following code into the Test tab editor:

Now, click the send button to send the request and after the response is received, see the Result.

Now, suppose we want to access the last attribute data, that is name. So, the JSON path for that value will be included[0].attributes.name;. Now edit the following code into the Test Tab:

Now, send the request and see the Result:

Advanced assertions on the response of a Mock server

Advanced assertions can also be performed on the response from the Mock server. We have already see what are the different types of programming concepts that can be applied to creating assertions. Some of them were conditional statements, some were loops and switch statements.

Generally, the conditional statement is a if. When a condition is satisfied or is found to be true, then the if statement gets executed. In this example, we shall that how can we check the existence of a name inside the response. This can be checked by comparing the JSON path of the data with the value we want to check.

Let, the name be Rahul. Edit the following code into the Tests Tab:

In the above example, the line if(mydata == "Rahul") checks the condition for the presence of the name Rahul in the given path.

It may be possible, that a data value if not found in one path, then can be found in a different path of the JSON response. To check a value in two different places, either we can use two of the statements or can use an OR operator inside the if statement.

Now, edit the following code into the Tests Tab of the request:

In the above program, you can see that, there are two different JSON paths:

Before sending the request, you are advised to clear the console, so that the new logs can be easily understandable.

Now, send the request and after the response is received, see the console output:

As discussed earlier, code snippets are nothing but ready-made codes that are integrated into POSTMAN to create assertions, check status code, search for a keyword, setting or getting variables.

Code snippets help in creating scripts easily and also the time to write code for a simple test can be reduced significantly. Let us see the applications of some code snippets.

To go to POSTMAN snippets, go to the right side of the interface and select the code snippet you want and it will be automatically pasted into the editor. 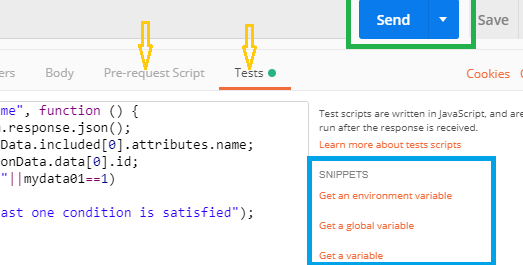 To check the status code, Select Tests Tab of the request, and once the editor is opened, the snippets must be visible to you.

Click into the snippet: . And the code for the test will be automatically pasted into the editor:

Now, send the request and wait for the response. Once the response is received, go to the Result tab of the Response and see the result:

Searching for a string in the body

There are functions in POSTMAN for searching a certain keyword or string in the body of the response. Use the code snippet: . Once you click into the code snippet, the code must be visible into the Tests editor.

I shall search for the string Chercher.tech. Edit the code below:

Now, send the request and check the result after the response is received.

Now, it is also possible that the server returns some different codes like 201, 202, etc, which are somewhat similar to the Ok status code: 200. Now, let us see how we can check for different status code:

Edit the following code into the Tests tab of the request :

Now, send the request and see the result tab after the response is received from the server:

As you can see in the above response, it's showing PASS.

Check for the Response Time

Use the code snippets to see the response time or edit the code below:

As shown in the above code, we are checking for the response time to be less than 200 mili-seconds. After it is done, send the request and wait for the response. If the response from the server, has any of the three status codes, the test will PASS.