JavaScript is a programming language that is developed mainly for website technology. JavaScript is used to make webpages more dynamic and attractive. It is also used for validating different data which is fed into the website and also different functions, scripts and logic can be implemented on the webpage using Javascript.

Mainly JavaScript is less used as a standalone programming language and is mostly used after integrating with Front end elements like HTML, XML, etc.

Below are the basics we need to know before getting started with POSTMAN :

A JavaScript variable is an identifier that specifies the storage location for a certain value. There are two different types of variables in JavaScript. They are Local Variable and Global Variable.

Below are the Rules for declaring a variable in JavaScript:

In the above example, the variable myvariable is a local variable and only can be accessed within the function testfunction().

As shown in the above program example, the variable mydata is declared and initialized globally, which is not within any function. Therefore, the variable can be accessed by both the functions- func01() and func02().

Like any other programming, language JavaScript provides different data types to hold different values. The data types can be broadly classified as:

In JavaScript, data types for different types of values should not be specified, as the type of data is taken care of by the JavaScript Engine.

Just var should be used to indicate that you are declaring a variable.

For example, in the case of,

var number= 85; or var name = "Riya" , the JavaScript Engine senses dynamically that the variable number is an integer type variable and name is a string-type variable.

The following are the primitive data types in JavaScript:

In JavaScript, there are three different types of conditional statements. They are:

For example, consider the below script :

This conditional statement is used to execute a code/block of code when a condition is found to be true or false.

Using the else-if statement, several conditions can be checked individually.

A switch statement is used when there are multiple blocks of code and based on the optional selection a particular block of statements can be executed. A switch works similar to the if...else if, but it is more convenient as numbers, characters, etc can also be used to indicate the option.

As shown in the program output, the first option in case 1 got executed, as we initialized the variable option to 1.

Loop is a way in JavaScript programming to execute a statement/block of statements in a repetitive manner. Loop is important when a similar task has to be done again and again.

There are three different kinds of loops :

A function in JavaScript is nothing but a keyword that represents a block of the statement. Using function we can use reuse or execute the block of statement just by calling it wherever we want.

There are some advantages of using a function:

The syntax for array declaration :

To access the array simply, you can use the array name with the index. Such as to retrieve the first data in the array, we shall write name[0]. As, you that the array addressing starts from index 0, so all the elements stored in the array can be accessed using the array index starting from 0.

Therefore the name[0] will return me data - Rahul.

An easier and convenient way to create arrays and objects is to write the javascript into your web browser console. You can use any web browser, but Mozilla Firefox or Google Chrome is a better option, for their reliability in inspecting elements.

I shall be using Google Chrome. To start with Chrome's console:

In the console tab, you will get an editor to edit your script and see the output.

Not only values but you can also have functions as well as other arrays that can also be an element of an array in javascript.

Object In JavaScript can be created in different ways:

In the above Program, the object name is student. And it has three attributes inside it: roll, name, and grade, with an integer value 10, string Rahul Kumar and a character A respectively.

Suppose we want to create an object instance called: employee. So, we shall write like:

In the Above program, you can see that the object name is employee and is directly created with the keyword new along with the function Object(). But the property along with the data is set with a dot(.) operator, like- employee.id= 10. Here, we are declaring the property called id as well as assigning it with a value 10.

To create an object using Constructor, we have to declare a function with the object name we want to create. This function will have arguments that represent different properties of the object. The keyword this will be used to refer to the current object.

In the above program, we have declared a function called student using the keyword function, which is nothing but a constructor, as all the arguments inside the function are initialized inside itself using this keyword.

Then outside the scope of the constructor function, we have simply created an instance of the object just by using the keyword new before the user-defined object- student.

You can see the response starts with different object properties such as page, per_page, total, total_pages, and data. Now, see that inside the attribute data, an array starts which also has an object inside it.

So, within the attribute data, you can see different records with fields like- id, email, first_name, and last_name. Now, to get access to the id, we must understand the JSON path. The whole response is referred to as JsonData. The data[0] indicates the first attribute inside the data, and then we can access the last_name.

Therefore, to access the last_name corresponding to the id =7(which belongs to the first record), we have to write the path as:

The above code means, access the last_name of the record data[0] of the JSON response jsonData.

So far we have seen the basics of javascript so that it becomes easier to write tests in POSTMAN and the code snippets available in POSTMAN can be easily customized or written from scratch. Now we shall see the practical implementation of JavaScript in writing scripts.

Check whether the value of any attribute is matched with any other attribute in the response. For example, in our response, we have seen that for all the individual records we have a unique id and first_name, last_name, etc.

Let us consider our first example, last_name as . Our task is to check whether the last_name is present in the record whose id is equal to 7.

Now, edit the following code into the Tests Tab of POSTMAN.

Now, hit the Send Button and send the request. After the response is received, just go to the Result tab and see the result. It the last_name is matched in the record of id 7, then it should return a .

What if the last_name did not belong to id 7?

Let us check for a different name, and it should give a FAIL result.

In API testing, it is equally necessary to check for the FAIL test case also. Getting a valid output does not(never) means that the testing is correct. It can create a dangerous error if, for negative test-condition, it produces a valid output or a

Now, just insert a different last_name and see what happens. So just edit the code, and check for last-name: Rahul for the same id =7.

Now after sending the request and receiving the response, check the Result tab:

We can also compare the value of different attributes in the POSTMAN response. For that, we have to refer to the JSON path for the two different data.

first_name path for id = 7 is: jsonData.data[0].first_name

first_name path for id = 8 is: jsonData.data[1].first_name

Now, send the request and see the Test Result.

If-else statement in the script in POSTMAN is a conditional statement to execute some code when a certain condition is reached. But such output which is customized is displayed in the POSTMAN console.

To display the value of a variable, string, or any data in the POSTMAN console, console.log() is used.

Let us check with the help of if-statement whether the last_name : Lawson is present in the response body whose id is 7. It is the same as that of the previous code, just we shall add a if-else block to print the output in the console.

Edit the following code into the Tests tab of the request.

Now, before sending the request, open the POSTMAN console and clear the console.

To open the console: Go to the view tab in the POSTMAN toolbar and select the console window. 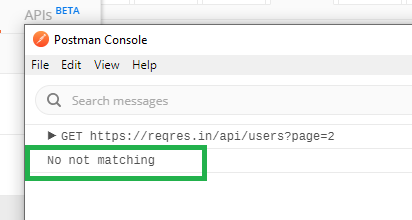 In the above image, you can see that in the console the text for the else-part has executed. As in the if-condition, we have provided a wrong name that does not exist in the record of id =7.

For loop in Script

We can also iterate a part of a script in POSTMAN using loops. In this example, we shall use for-loop to check whether the name is present in other records as well. As we are uniquely identifying the records with the help of id, therefore we shall iterate our if condition by using the for a loop.

Edit the following code into the editor :

In the above script, the variable called jsonData, is assigned the JSON response. And then the for loop is used to check whether the name "Lawson" is present in any of the records. Now, the record is identified by data[index]. The loop starts with the variable index 0 and goes up 3, as per the condition: (forvar index = 0; index <=4 ; index++).

Now, Go to the POSTMAN console, clear the console, and then send the request to see the output after the response is received.

While Loop in Script

While loop is used when a part of the script or any condition has to be checked again and again till a condition is reached. In this example, we shall search for a name in the response and keep on searching until the name is found.

Edit the following code into the Tests tab in POSTMAN.

In the above program, you can see that we have written a while condition as: while(myvar!="Edwards"). Because we know that, that some last_name is present in the response, but we don't know, in which record it is present.

Therefore, we have used a while loop to iterate the search and get out of the loop only when the last_name is found.

Outside the scope of the while loop, we have written index = index + 1. This is done because the array index starts from 0 and so the number of iterations it covers will always be displayed less by 1. So, to output the actual number of iterations, we increase it by 1.(for understanding purpose.)

Go to the Console and clear the console and then hit the send button to sent the request.

In the above console output, it is very much clear that the loop iterated 6 times. And in the 6th iteration, the name is found.

Switches are used when a code/block of code has to be executed based on a certain option that is selected. In POSTMAN script we can execute code or print text in the console based on the data values inside the response.

Edit the following code into the Tests Tab:

So, we implemented two cases: