Data cascading in POSTMAN is nothing, but passing data from one response of a request to another API.

This is done when one API test is dependent on the response data of another API.

In this article, we shall discuss only about Single Level Cascading.

It is possible to get the data from one response of an API and fetch the same data into a different API. Now, let us see how you can do it.

First of all, you have to create two different requests. I shall use the same collection, and inside it, I shall create two API requests. One is the GET type and the other is a POST type. The way to create the API request is the same. Visit the same link- https://reqres.in/. And select the requests.

For the first API request, select the GET: List User. Then copy the URL and also the request endpoint and then create the request. (This is your first request).

Now, create the second request. Visit the link: https://reqres.in/ And then select the PUT: Update.

Copy the URL and the request end-point and paste it into the URL bar of your second request. I have named it as: update-user.

Now, you have created both the requests.

Now, the next step is to parameterize the value in the body section of the request. Go to the second request (update user) and navigate to the body section and then select the raw. Then select a field and replace it with a variable.

And now I have to change the morpheus into username01.

To set an environment variable, go to the Manage environment (gear icon) in the top-right corner of the POSTMAN interface or create a new environment by clicking on the New button.

Now, click on the send button and see the output. As you can see below, the name which morpheus earlier is now changed to rahul

Now, to fetch the data from the API response, navigate to the first API response. And go the Tests option. And edit the below code there:

The data[3].first_name is the path of the first name. So, to get the path, visit: http://jsonpathfinder.com/ and then paste the response test into the editor of the website and then navigate into the right-side of the same page to get the path:

Now, paste it into the json Path finder. 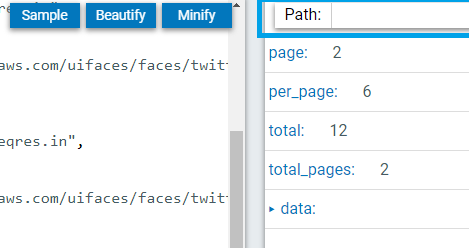 Now, click into data, of the attributes and the corresponding path will be available above in the path bar. Then copy the path.

Now, also you can set variables as Global Variables. As there are different snippets available into the POSTMAN interface itself, you can use it simply and write the code for Global Variable. 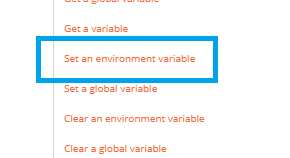 Now edit the below code into the Text section of your second API request:

After that, save it, and click on the send button. And now check into your current environment, whether the variable has automatically taken the value:

So, in the above image, it is visible that the variable username01 has been initialized with the value Byron. And so the current value is also the same for the variable.