There are many ways to write the assertions in POSTMAN, one is the Snippets, which are nothing but a block of codes that has some unique functions inside it and are ready-made inside the POSTMAN software. Anyone can simply click into the snippets and get the code inside the text editor and run the test.

Here, we shall discuss assertions that are mainly performed on the responses which are in .json format.

Before getting started with Assertions, it is very important to understand JSON and why it is important in POSTMAN.

JSON stands for JavaScript Object Notation. It is a lightweight format for storing and also transporting data and comes into play when the data is received by any webpage from the server. JSON has gained popularity because of its simplicity and self-describing nature.

is always written as Name and Value. For example,

It indicated, that the name is first_name and the value is Rahul.

The most common use of JSON is to read the data from the web-server and display the data on the desired webpage. In JavaScript, there is an in-built function called-JSON.parse(text);. This method is used to convert the strings into a JavaScript object.

Assertion can be possible on different attributes such as an object, arrays, etc. In this section, we shall see how assertion can be written on JSON Arrays. As in POSTMAN, we have seen that the response received from the server is displayed in a JSON format by default in POSTMAN, if not, we can select JSON application and get the response converted into the JSON format.

Before we apply any assertions, we shall consider this Request:

And the response to this request is below:

To make use of JSON assertions, the first step is to parse the JSON body. Edit the below code into the editor:

This code pm.response.json() will parse the JSON body and the code console.log(jsonData.data) logs the object into the POSTMAN console. 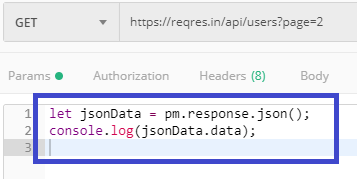 Open the POSTMAN console, and see the arrays inside the object. 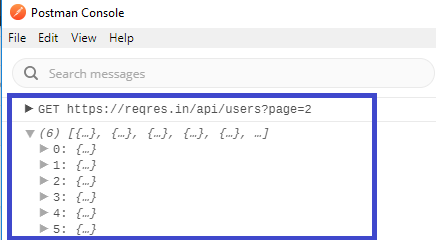 Edit the below code to access the name inside the array: