Drawing on Images in OpenCV

Please be aware that I will be writing the below code only once, but I will be using it in every program. Code to get the image in RGB color in OpenCV

So when we draw any shape on the image will alter the array, with new values wherever is required based on the shape and thickness, and color of the shape.

Let's understand the rectangle first; a rectangle can be drawn using coordinates of two points. One being left the top corner, second left the bottom corner. I hope you know that the rectangle has only straight lines.

In the below image, we got to provide point D and Point C, Point E, B are calculated automatically calculated.

Try to guess what are the details present in the above rectangle (not drawn using OpenCV).

Similar to the above details, we have to provide details to OpenCV so that it can draw the line with the given details.

rectangle() is the function that will be used to draw the line.

Color should be in RGB not BGR

Complete code to draw a rectangle on an image in OpenCV.

Drawing Circle on an Image with OpenCV

Drawing circle in a math class needs below items; the same applies when we draw a circle using OpenCV.

circle() function in the OpenCV draws a circle over an image.

Draw line on an image on OpenCV

We can draw a line using the line() function from the OpenCV. To draw a line, we need the below details.

OpenCV example to draw a line 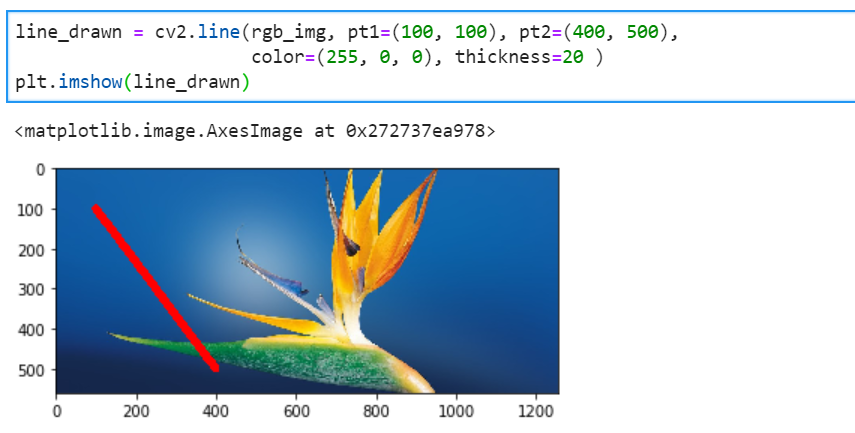 Fill the shape with color in OpenCV

So far, we have seen how to draw shapes, but sometimes we need to fill the shape with color.

To fill any shape in OpenCV, we need to provide thickness as -1.

Text on the Image in OpenCV

The Bottom point highlighted in the below image is going to be the origin of the text in OpenCV.

putText() function from OpenCV will help us to put the text into an image. Below are the details that are required for writing text to the image.

We have seen some basic shapes, but sometimes the object we want to highlight could be in a shape that is not standard. In such cases, we can use the polygons to create custom shapes with OpenCV.

polylines() function in OpenCV draws polylines over the images.

Difference between polygons and polylines (OpenCV):

Code example to draw the polyline on an image, if you notice we have set that shape is not closed. So below code will create a polyline.

Setting isClosed=True in the above code will close the shape and creates a polygon.

Starting and closing points as same in polylines:

When starting and closing points are the same in polylines, then it will create the polygon.

Fill the polygon in OpenCV:

In all the shapes, OpenCV has provided an option to provide thickness as -1 so that it will fill the shape, but in the case of polygons, the thickness cannot less than zero.

If you try to use -1 for thickness, then you will get below error.

To fill the polygon, we have to use a funtion called fillPoly() in OpenCV.