With the help of the PID, we can track the process and two processes won't have the same process IDs.

A process executes in two ways they are,

Every process by default runs in Foreground which means the output is printed on the screen.

The best example for the foreground process is the ls command which prints the output on the screen by listing the files and directories.

When a program is running in the foreground, we can not start another process without completing the previous process. It is because of this reason foreground process is considered a time-consuming process.

To enable the background process you have to provide the ampersand symbol (&) at the end of the command.

The ps command is used to track or to list all the running processes.

If you require more information about the process you can use the ps command along with the -f option.

To get more information about a particular process, you can give the ps command along with the PID.

The information provided by the ps command for the process are :

Output: The process which has the process id 19 is terminated.

Sometimes a process cannot be terminated by using the kill command. To terminate such kind of process uses the below command.

-9 forces the termination of the process by blocking the signals.
Example :

The below command is used to get the list of jobs that are either running or stopped.

The bg command is used to resume the suspended jobs and runs them in the background.

The fg command is used to start the job which has already stopped in the foreground.

The top command is used to show all the running processes within the working environment of Linux. 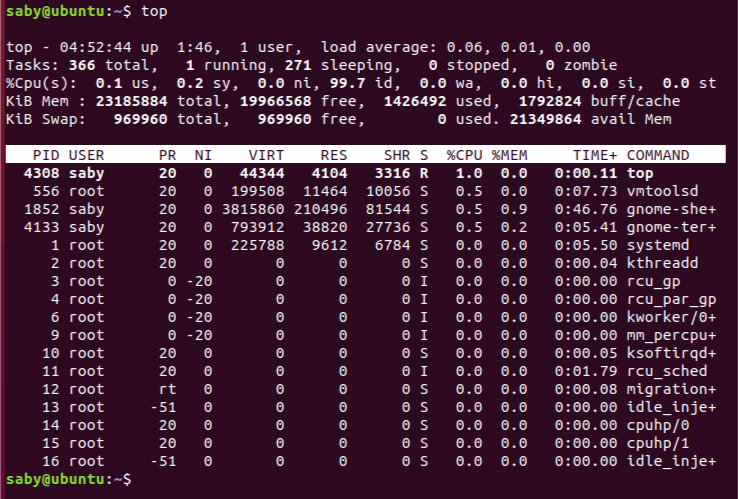 Press 'q' on the keyboard to move out of the process display.

The nice command starts a new process (job) and assigns it a priority (nice) value for the process. The nice value ranges from -20 to 19, where -20 is of the highest priority and 19 is of the lowest priority

The renice command is used to change the priority of the running process.

The df command shows the disk information of the Linux file systems.
Syntax :

Thefree command shows the total amount of free and used physical and swap memory in the system, as well as the buffers used by the kernel