In Linux, every data is in the form of files. Doing modification in the file is called file management. Modifications that are done in the Linux files are,

Let's learn all the modifications done in a directory/file in Linux.

Creating and removing folders in Linux

We can create directories/folders with the help of the command mkdir.

In the below image, I have created a folder named chercher after that a file named f2 is created in the chercher folder.

If we try to create a file or a directory in a location where we do not have permission, we shall get the permission denied message and it shall not be created. For example, Creating a file in the root directory.

We can remove directories with the help of the command rmdir.

Syntax to remove the directory :

By using the ls -R command you can view the folders as well as subfolders.

Syntax to delete the folders and subfolders : 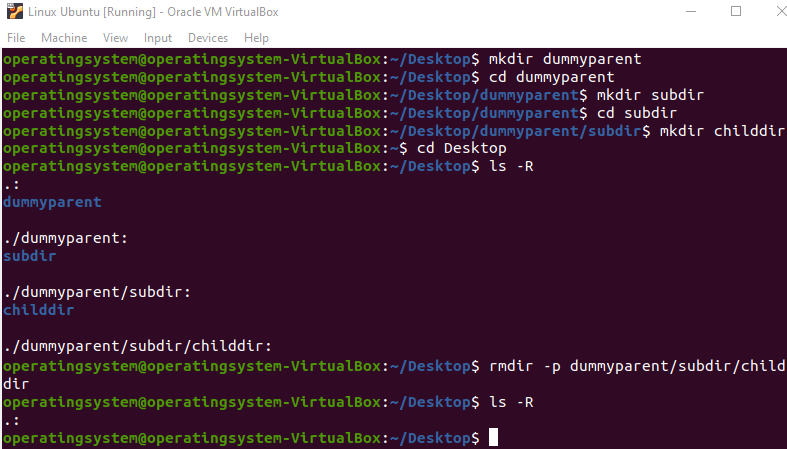 Creating and editing files in Linux

We can create files in the Linux system using the commands touch, and vi. Using the vi command we can edit the file by typing some contents in the file.
Syntax to create a file :

How to Create Multiple Files using the touch command

By using the touch command, you can also create more than one file. For example, the following command will create 3 files named, f1, f2, and f3.

To change or update the last access and modification time of a file called chercher, use the -a option. The following command sets the current time and date on the mentioned file. If the chercher file does not exist, it will create a new empty file with the mentioned name.

Using -c option with touch command avoids creating new files. For example, the following command will not create a file called tech if it does not exist.

You can explicitly set the time using the -c and -t option with touch command.

How to Use the time stamp of another File 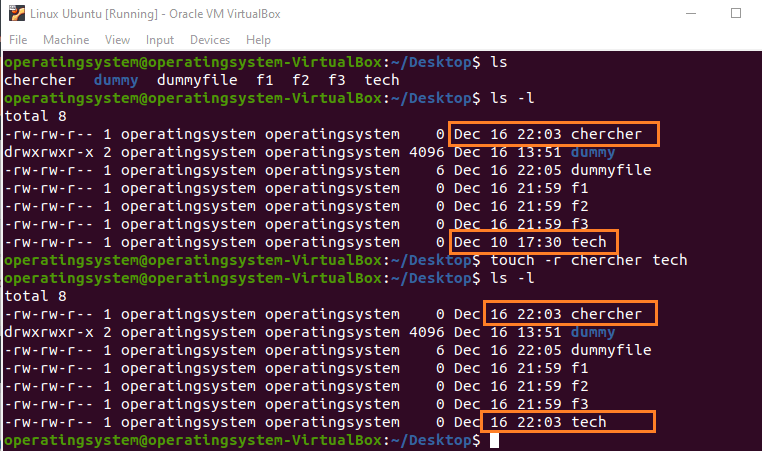 Using the vi command we can create a file as well as we can edit the content in the file.

To exit the editor without saving press ESC and type :q!

There three ways to add text to a file are

If we use the > symbol for adding the second line, the first line shall be wiped out from the file and the file shall be recreated with the new content. To append content to the same file we have to use the >> symbol. 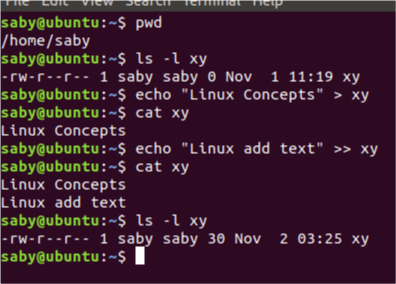 To capture the content returned by a command in a file, we have to use the redirect command >.

Here, the output of the ls -l xy command is redirected to the listing file.

Viewing the contents of the file in Linux

cat command is used to view the contents in the file.

less command is also used to view the contents of the file but only the format of viewing the content changes.

As soon as you pass the command the below prompt opens if you want to close the prompt press f1 so that you can come out of the prompt.

nl command is used to view the contents in the list format.

To copy a file from one folder to another folder copy command is used. The copy command doesn't remove the original folder.

Syntax to copy a file : 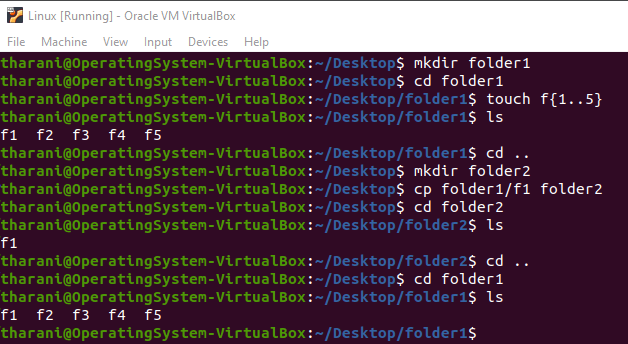 Option 'r' with the copy command can be used to copy a directory including all its content from a source directory to the destination directory. 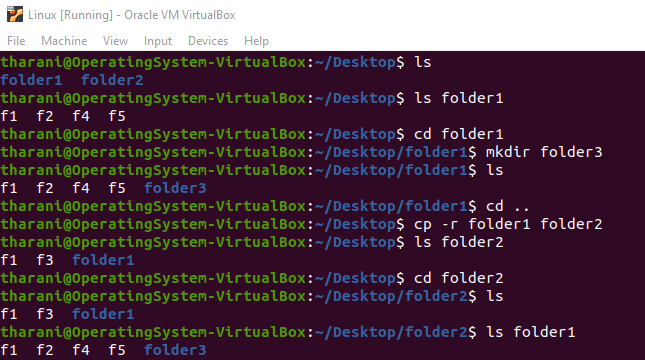 Multiple files or directories can be copied to a destination directory at once. In this case, the target must be a directory. To copy multiple files you can use wildcards (cp *.extension) having the same pattern.

To overwrite the file the command cp with the option -i is used.

To copy the file by displaying the details the command cp with the option -v is used.

To recursively copy the folder and its contents the command cp with the option -R is used.

We can remove the files by using the rm command.

Options such as -rf can be used to recursively delete the files. 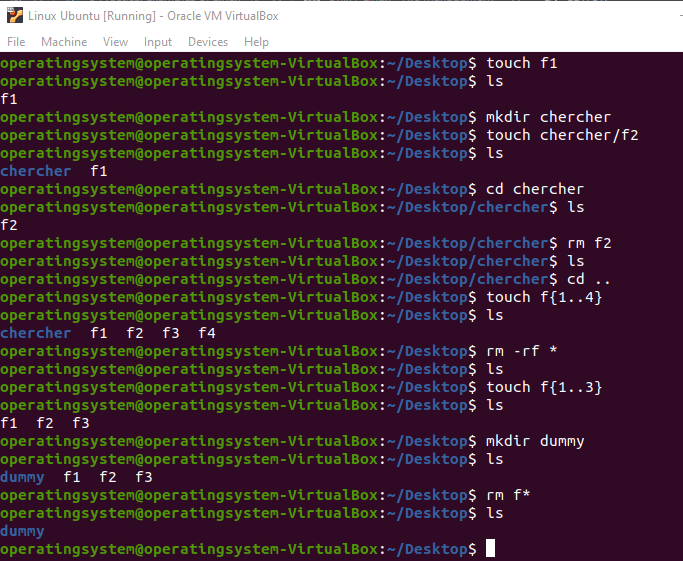 We can move the file from one folder to the other folder by using the below syntax,

Move command copies the contents to the new file and deletes the original file.

This command is used to move all the files from the current directory to another specified directory at once. 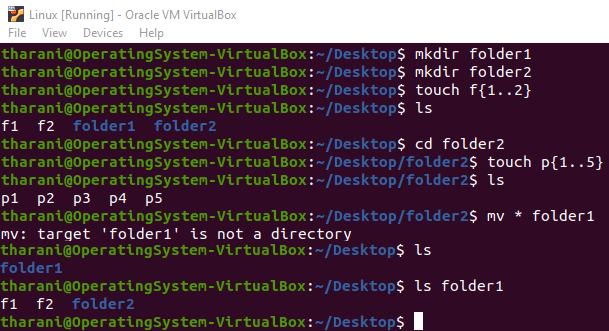 When you use the '-u' option, files that already exist in the destination directory will be automatically skipped and all the other files will be copied. 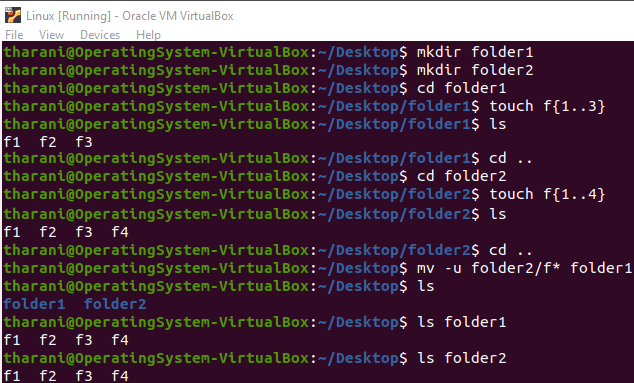 When you want to rename a large group of files at once then you can use rename command instead of mv command. 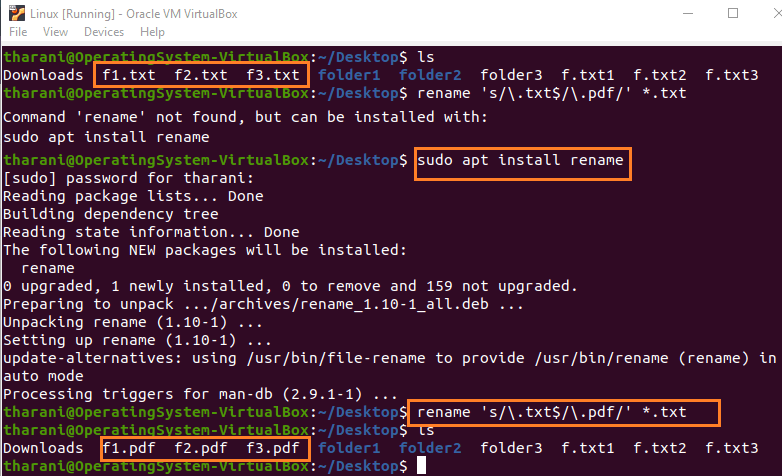 Hard and Soft Links in Linux

Once a file is created, the operating system assigns a number or a pointer to that file on a hard disk. This is called the inode.

A soft link is a link that is erased if a file is removed or renamed. The command to create a soft link is ln -s.

A hard link is a link that will not be affected if a file is removed or renamed. The command to create a hard link is ln. 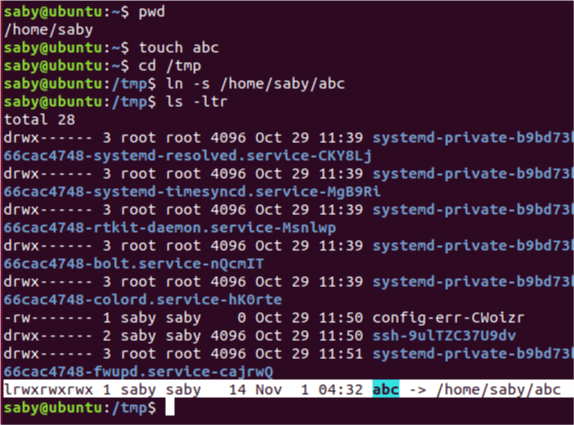 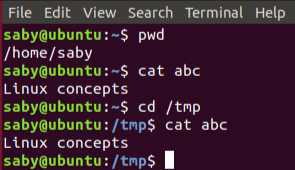 To get the inode of files we have executed the command ls -ltri. The inode created for the actual file abc and its soft link is different.

If the actual file abc is deleted with the rm command, then the soft link associated with that also gets removed by default since the source of the link is removed.

Let us create a file xyz in the current directory with the touch command and create a hard link to that file in the tmp directory. 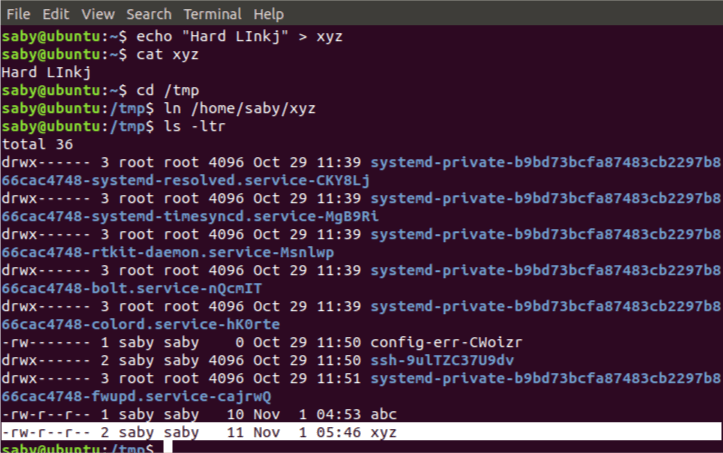 If the actual file xyz is deleted with the rmcommand, then the hard link associated with that do not get removed even though the source of the link is removed.

Let us create five files that have digits 1 to 5 and start with abc. The file names end with -xyz. The command should be touch abc{1..5}-xyz. Now let us list all the files which start with abc. The command should be ls -l abc*.

Let us remove all the files which end with xyz. The command should be rm *xyz. 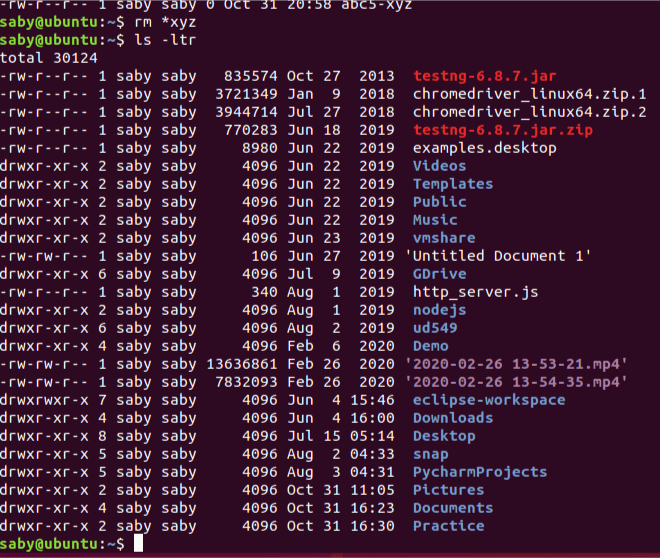 Let us now get a listing of all files whose names contain bc. The command should be ls -l ?bc*.

We may not be able to delete, copy, rename, or move a file if there are issues in the following parameters:

We can find files and directories in the Linux system with the help of the commands find and locate. While find is used to search a particular residing inside a large hierarchy. The locate command can help in small searches. 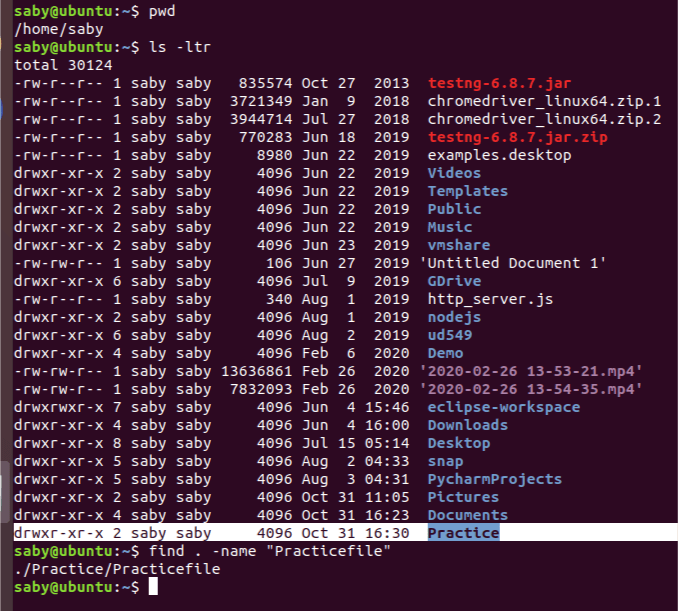 Thus the Practicefile file resides under the Practice directory which is inside /home/saby.

Difference Between Find and Locate

Please note: To modify the database we should run the updatedb command from the root. If we do not run this command, then the database gets updated automatically after some time.

In the above image, the find command returned the relative path of the Practicefile. But the locate command does not locate since the database has not been updated yet. 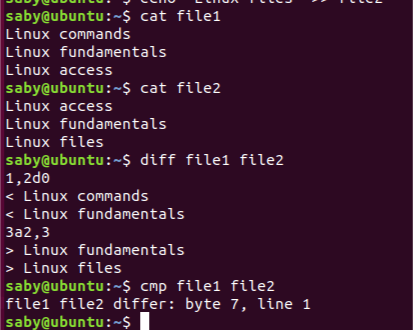 Compress and Uncompress Files in Linux

Some of the compounds to compress and uncompress are listed below:

To untar the tarfile.tar the command is:

To compress the file, tarfile.tar the command is:

To uncompress the zipped tarfile.tar.gz file the command is:

The truncate command is used to shrink or extend the size of a file to a particular size.

The command truncate -s 27 filename shall shrink the file size to 27 and also wipe out some of the contents of the file.

The command truncate -s 50 filename shall extend the file size to 50 but the original contents of the file shall not be still available.