Continuous integration, CI, is the practice in software engineering of merging all developer working copies to shared mainline several times a day.

If you're familiar with Git, you will see that continuous integration is just integrating your own code together with the rest of the projects.

This can be in the master branch, develop branch, or even in your own branch.

Continuous delivery, on the other side, abbreviated as CD, is a software engineering approach in which teams produce software in short cycles, ensuring that the software can be reliably released at any time.

Jenkins can really help you to release software in short cycles and then ensure it's reliability because we are going to test and build the software over and over again.

In practice, CI and CD means that we are going to verify and publish work by triggering automated builds and tests. And Jenkins is a tool that we can use for that.

We are going to do these automated builds and tests for every commit, or at least once a day.

All developers should push their changes to version control, which should then be built and tested, which can be done by Jenkins.

Jenkins provides a feedback loop back to the developer to fix the build errors.

It is a lot quicker to have a developer fix the error immediately rather than wait with it because it's then when the code is still fresh in memory.

Jenkins can publish every build of your software. Every time someone commits a change, Jenkins can build and publish this piece of software.

This build already has gone through automated testing, you can configure this in Jenkins. Then, Jenkins will test whether the code is good, whether the features the developer implemented actually work and then when published and deployed to development, a QA or staging server, you can advance the software development life cycle, the SDLC, much quicker.

The quicker you can go through an iteration of the SDLC the better.

We will be using putty hereafter, so let get the Ip address from the VM. We are using putty rather than VM because managing things from Putty is actually pretty simple and it's even easier.

If below steps become outdated then you refer to official docs : https://docs.docker.com/engine/install/centos/#install-using-the-repository

Now, use beneath dnf command to install the latest version of docker,

After the installation of docker, start and enable its service using the following systemctl commands

Step:3) Verify and test Docker CE Engine
To verify whether docker ce engine has been set up correctly or not, try to spin up a "hello-world" container using below docker command,

Output of above command

Install Jenkins on CentOS with Putty

Once the Jenkins image is installed you can see where it is located using the following command.

When a docker image is destroyed all the data in also will be destoryed, but we need to store the data before destrying the docker image. So using docker-compose file we can specify where we want to save the data.

The explanation for Jenkins docker-compose file:

Let's create a folder to store all the Jenkins related stuff and open it.

Now e need to store the data from the jenkins image, to store it we have to create another folder insie the jenkins-data . Also we will be using this folder inside our docker-compse file.

Create file docker-compose.yml inside jenkins-data folder and put the below content. Use spaces and not tabs

if you list the directory; you should see below items

Once we create the docker-compose, we can create/start the Jenkins service.

Check whether docker service up or not using docker ps command

Get your VM IP address by ip a and use the port as 8080 as defined in docker-compose.yml file. 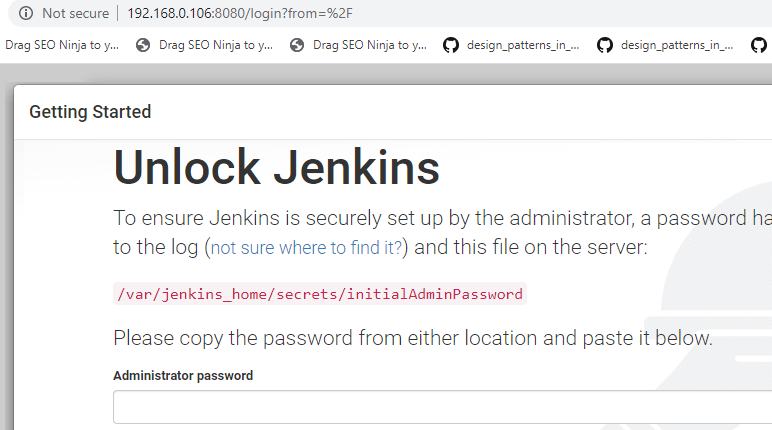 Save and Continue then Finish.

Tada, You are at END and Installation is successful.