In this article we will take a look on

Variables are reserved memory locations to store values. When you create a variable you reserve some space in the memory.

Based on the data type of the variable system allocates specific amount of space in the memory and decides what can be stored in that. Therefore, by assigning different data types to variables, you can store integers, decimals, or characters in these variables.

There are two data types available in Java −

Array and string doesn’t come under primitive data types. One of the main reason for that is Primitive data types has limitation that they have fixed size and can hold data of that type only but String on the other hand can vary in size and it can hold any type of data using its wrapper class.

Up casting and down casting

Up casting is casting to a super type, this is by default done by the compiler and doesn’t require any external commands to perform the operation. The up casting is always allowed by java compiler.

Below example shows how downcasting is performed.

These are used to represent constant values. Literals are source code representation of a fixed value or the sequence of characters which represents the constant value that is to be stored in a variable. There are five different kinds of literals present in java.

These literals doesn’t need any prefix.
For example: int d = 10;

These are basically a sequence of characters enclosed in double quotes. These string literals have to occur in a single line.

There are so many characters literals that are used in java and each has its own usage. Here are some of the character literals listed down below. 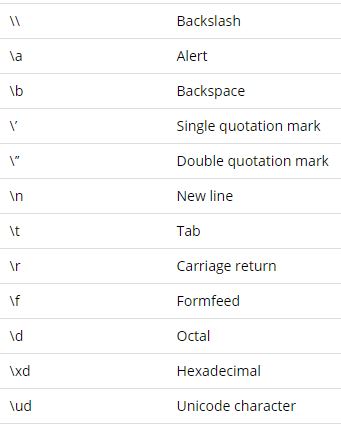 Variables are basically named storage places in java. These provide us with memory space which determines the size and layout of the variable's memory; the range of values that can be stored within that memory; and the set of operations that can be applied to the variable.

A variable has to be declared first before we can make use of that variable. Data type variable name ( = value ) if you want to assign value to the variable.

Here are some of the valid variable declarations in java

Example showing the local variable declaration and utilisation in java.

This is Krishna.I am the author of this blog. I am a technology enthusiast. If you found this article helpful please share it with your friends. Please provide your valuable comments on this blog.