Polymorphism is the ability of an object to take on many forms. The most common use of polymorphism in OOP occurs when a parent class reference is used to refer to a child class object.

We can create functions or reference variables that behave differently in a different programmatic context. Polymorphism is one of the primary building blocks of object-oriented programming along with inheritance, abstraction, and encapsulation.

There are two kinds of polymorphism in Java :

Things to remember on method Overloading

Changing the type of a value from one primitive type to another primitive type is called as Types casting. Mostly typecasting occurs with the types whose parent is Number class.

If the Bigger size is converted to a lower size, then it is called as Narrowing. There is no auto-narrowing, which means the compiler cannot narrow values unless the user specifies so.

If we do not specify the type conversion explicitly, then the compiler itself will perform the widening operation, and this is called Auto-Widening. 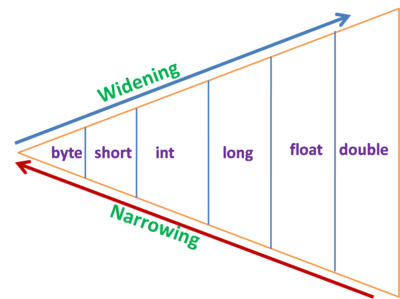 Example for widening and Auto-widening, and Narrowing

Typecasting will not occur in method overloading if there is a method with an exact matching signature.

More than one method with the same name and argument list cannot be given in a class even though their return type is different; Method return type doesn’t matter in case of overloading.

Can we overload the java main() method?

You can have n - number of main methods in a class by method overloading. But JVM calls main(String[] args) method which receives string array as an argument only.

The output of main method overloading :

The subclass has the same method as of Superclass. In such cases, Subclass overrides the parent class method without even touching the source code of the Superclass. This feature is known as method overriding.

The Subclass will provide the implementation as per its wish; the Parent class will not have any control over how to implement the method.

Dynamic method dispatch is a mechanism by which a call to an overridden method is resolved at runtime.

When an overridden method is called by a reference, Java determines which version of that method to execute based on the type of object it refers to.

In simple words, you have a grandfather and brother and sister. All of your grandchildren have inherited your grandfather's behaviors, along with your behaviors.

Now can I create a method which accepts your Grandfather behaviors, the same method can accept you ( any of your sibling) because you are his grandchildren.

So this method is not locked with your grandfather or with your sibling, but it behaves based on the parameter you pass. So the coupling between the method and the caller happens only during the runtime, this is called dynamic dispatching.

If you have heard of Multiple personality disorder in the real world.

In the below example the compiler cannot decide the coupling as the parameter is resolved at run time, so dynamic dispatching or runtime coupling occurs.

Sorry for the below example, just yesterday I watched the 'Avengers: Infinity War 1'.