volatile is keyword used with variable to make sure the value are read from and written to main memory rather than CPU cache.

Ordinary Variables: In a multi-threaded application where the threads operate on non-volatile variables, The variables are copied from the main memory to CPU cache, Now the threads access the memory from the CPU cache rather than main Memory to save time and increase the performance.

When there is more than one thread, then all the threads will access the variables from the CPU cache, which means all the read and the write operation are happening in the CPU cache.

Now when one thread makes changes to the variable then it is reflected to the CPU cache, so when other thread reads the value from the CPU it might get updated value and everything is fine and good.

There are computers which have more than one CPU, and each CPU has cache, now the ordinary variables will start to create problems. 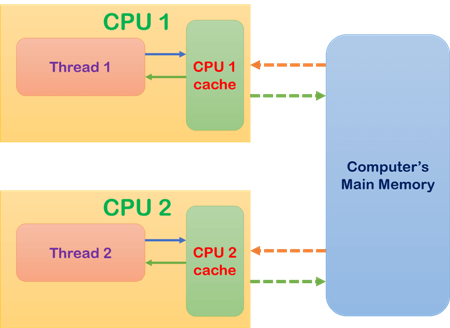 Imagine a situation in which two or more threads have access to a shared object which contains a counter variable declared like this:

Do not forget that thread-1 and thread-2 have different CPU caches, So when thread-1 makes changes to the counter variable, the changes have occurred with CPU cache, and there is no guarantee that every change in CPU cache will be reflected to the Main Memory immediately 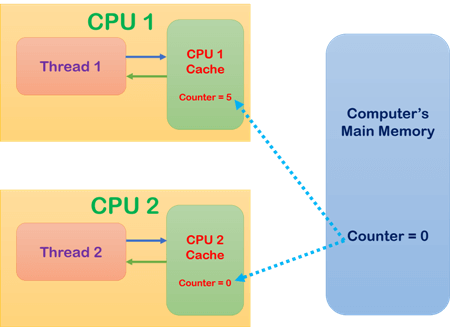 The problem with thread-2 not seeing the latest value of a variable because the value of counter has not yet been written back to main memory by another thread-1, this is called a visibility problem.

Visibility Problem: The updates of one Thread-1re not visible to other threads.

In above code, the updateTime() method writes three variables, of which only seconds is volatile.

Here hours, minutes and seconds are visible to the thread.

For reading the value, we can write the following code.

Therefore you are guaranteed to see the latest values of seconds, minutes and hours with the above read sequence.

JVM and CPU can re-order the provide statements without affecting the semantics of the program. Re-ordering occurs to increase the performance and reduce the execution time.

For example, The code that we have provided

Once the updateTime() method writes a value to seconds, the newly written values to hours and minutes are also written to main memory. It is good now all the values are into main memory.

So the new value of the minutes and hours are not made visible to other threads as expected sequence. The logic of the reordered code changed the meaning.

I know, I was not clear, So lets put it in layman terms,
Consider the example of a human life cycle: Infant was born, we start to crawl in four legs, we walk, we take help of walking stick.

Now JVM comes into your life, and shuffles the sequence as Infant born, we take help of a walking stick, we walk, we start to crawl in four legs. SO do you think this makes any sense? No, Similar way we want something with variable but it changed the sequence of writing to main memory

We will learn, how to handle this issue in next topic.

To address the instruction reordering challenge, the Java volatile keyword provides a happens-before guarantee, in addition to the visibility guarantee.

The happens-before guarantee guarantees that: Consider the below code for the example of a before-happens guarantee

JVM much faster than volatile, so Volatile is Not Always Enough

In the situation explained earlier, where only Thread 1 writes to the shared counter variable, declaring the counter variable volatile is enough to make sure that Thread 2 always sees the latest written value.

As an alternative to a synchronized block, you could also use one of the many atomic data types found in the java.util.concurrent package. For instance, the AtomicLong or AtomicReference or one of the others.

The volatile keyword is guaranteed to work on 32 bit and 64 variables.

is volatile atomic in java

The effect of the volatile keyword is approximately that each individual read or write operation on that variable is atomic.

Notably, however, an operation that requires more than one read/write -- such as i++, which is equivalent to i = i + 1, which does one read and one write -- is not atomic, since another thread may write to i between the read and the write.

The Atomic classes, like AtomicInteger and AtomicReference, provide a wider variety of operations atomically, specifically including increment for AtomicInteger.

can an array be volatile in java

Yes, you can make an array (both primitive and reference type array e.g. an int array and String array) volatile in Java but only changes to reference pointing to an array will be visible to all threads, not the whole array.

can a method be volatile in java

NO, only variable can be volatile

can a class be volatile in java

No, only variable can be volatile

why we need volatile in java

volatile with singleton in java

Volatile keyword in Java is used as an indicator to Thread that do not cache value of this variable and always read it from main memory.

Using Volatile keyword in Java on variables reduces the risk of memory consistency errors because any write to a volatile variable in Java establishes a happens-before relationship with subsequent reads of that same variable.

If a variable is not shared between multiple threads, then no need to use volatile keyword with that variable.

One way to implement the Singleton pattern using volatile is given as follows:

volatile in java vs synchronization

Use Volatile when your variables are going to get read by multiple threads, but written to by only one thread.

Use Synchronized when your variables will get read and written to by multiple threads.

threadlocal vs volatile in java