Git Stashing with an Example

Stashing is nothing but temporary storage, where git stash command temporarily stores the modified files, untracked files and staged changes made to our working directory in its stack and we can move forward and work on something else and can come back to the previous section and work whenever we want.

Let us go ahead and understand stashing with an example as follow:

In this section am going to walk through the steps necessary to execute a stash. Let us go to my project folder and then into my Git repository called Starter-web-1/, If you do git status, Git tells that, we are on a master branch with a clean working directory.

So I can modify a different file for something that just has to get done right now. In order to save the changes that I have for simple.html, I can use Git's stash command to stash away any changes that are work in progress.

So that I can move to another file, and work on something else, let's do that now git stash by default, it is going to execute the save command.

Now, let us check the state of our working directory git status, Git tells us that, we are still on master branch with a clean working directory and there are no files which are staged for commit or there is nothing in the Git's staging area.

Which confirms whatever actions the git stash apply command has to do. If you open the simple.html file, it put us back to the way it was, right before we issued the git stash command.

So now, we can pick up where we left off and continue editing this file. if you wanted to do any additional changes to this file, let's do it then save and exit. We are not quite done yet. Let us move forward, use the stash sub-command as git stash list , you can see a single item which is referenced as {0} which is nothing but where we start off, WIP means work in progress in the master branch and reference id.

Since we've already applied the stash, we don't need it anymore, which means we can drop the stash. So, we can just issue git stash drop command and it will drop the last stash.

In the previous section, you come to know that how Stash command will work, Now let us know how to stash an untracked file as shown below:

We will start where we left off, Currently, am in the working directory of my Git repository, The first thing we have to understand is that by default git stash command will stash only the tracked files in Git repository.

If you do a git ls -files , you can see a list of all the files that the Git repository is tracking including humans.txt file. 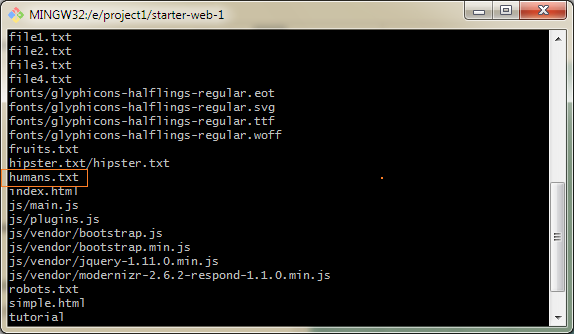 we could just simply add the new file to the Git staging area and once that occurs, Git will start tracking the file.

However, if you are not sure, if you want to add that new file, but you still want to stash it, so you can determine that later, Let us do a git status, it shows as follow.

In this Section am going to teach you all how to manage multiple stashes in the Git repository.

Let us start from where we left off, If you do a git status, Git tells that, we are in the clean working directory on master branch with my Git repository.

In the previous section, we used only git stash command because we were doing just one stash at a time, but now we have to use a parameter called save when we are going to do multiple stashes.

This git stash save "simple changes" this will be like a commit message but for a stash, This will make it easier for us to differentiate between the different stashes, Hence we have created our first stash.

Let us go ahead and edit the index.html file, add some text to the title tag, Adding a title for Stash example, save then exit.

And then do another stash like git stash save "index changes"

Now let us edit README.md file, add some text under the starter web project as shown in the below image and save then exit. Once you have done with editing, let's create another one stash git stash save "Readme changes"

You will notice something interesting here that, the stash index is probably the reverse of what we are expecting that the last stash is index "{0}".

Now, the index "{0}" may be a thing that is throwing you off as well, but that comes from a programming background, where indexes of lists or arrays start with index "{0}". But, the part that is counter-intuitive here is that the last stash is index "{0}", and not index "{2}".

If you do a git status, Git tells that, we are on a clean working directory.

And now, you can re-apply the stashes, just like in the other command, you can specify the specific stash we want to apply, here am going to apply for the middle stash that is nothing but index changes, so let's do that now git stash apply stash@{1} and press enter.

git stash will apply that specific change that is captured in that stash, so now, we have our modified file index.html.

If you do a git status, Git tells that, we have modified file just like stash apply.

Like other commands we covered, the drop command will also take the stash references, Before that, just list out all the stashes once more, git stash list .

So we have applied the stash to the reference {1}, that is nothing but index changes, so we do not need anymore, let us drop that stash git stash drop stash@{1} , so the index stash has no longer listed in the stash list.

If you do git stash list , here the interesting thing is that the next stash available has gone in to populate the stashes at "{1}", which is the simple changes.

You can see only two stashes listed here if in case, you do not need these two stashes for some reason, then you can delete these stashes as well by using the command called git stash clear , so it has cleared all the stashes.

If you do git stash list, there is no result.

Let us understand how to do a branch stashing in Git.

Start from where we left off, If you do a git status, you can see that you have a modified file called index.html in your working directory.

By doing all these I realize that this really does belong on a feature branch and not against the master branch.

We can correct these by moving all it to the feature branch, the first thing we need to do is that we have to add all these modified files and also new files to stash.

Comparison Section cleanup and Push back to Github

We have reached the last section of stashing, here am just going to synchronize changes to the Github.