Branching: Branching is a new feature which is available in the modern version control system, The branch is used to store the history of commits.

Merging: Merging is nothing but combining the sequences of different commits into a unified commits history, is called as merging the branches.


Forking and Cloning with Git

Branching is a new feature which is available in the modern version control system, The branch is used to store the history of commits.

Git is having default branch called the master branch, we can create a new branch with an existing branch, we normally use a specific tag or commits as a starting point.

Whenever you make a commit, HEAD is updated with the latest commit, Usually, a branch is used to work on the new feature, once the feature is completed we will merge back to the master branch.

So, here we are creating a new feature branch and once the feature is completed, we are integrating back to the master branch.

To start off with the branches first, am going to list out all the branches which are present in our Git repository by using git branch -a.

Where "-a" parameter will list out all the branches including both Local and the Remote branches and git branch will recognize the current active branch by putting an asterisk before the branch name.


So if you pass the command git branch -a, it will list the new branch, and the asterisk is still on the master branch only, so to switch that we will use the checkout command.

Now you can see the whole history by using the command, git log --oneline --decorate , If you observe, the first commit which is listed here is the last commit with several labels associated with it, like HEAD, which usually points to the last commit on the current branch.

And also we have origin/master, origin/head, mynewbranch, and the master branch, Here HEAD and origin/head points to the last commit on their respective branches in both Remote and Local.

Master branch is the branch where we are working with from long and mynewbranch is just now we had created Since we have not made any changes and hence all the branch labels are pointing to the same commit. The branches are just pointers and new branch won't start without any particular commits other than from master.

And if we want to delete the branch which is of no longer used and also you cannot delete any branch which is currently you are on, before deleting, first move on to different one and then you can delete it. git branch -d <branch name>

To check whether it has removed or not, you can use the command, git branch -a so, as I told you before, it will list all the existing branches.

Merging is nothing but combining the sequences of different commits into a unified commits history, is called as merging the branches.

The Merge command is used to integrate changes from another branch and combining all the integrated changes into a single commit, instead of treating them as individual commits.

There are two kinds of Merging:

This kind of merging happens only when the master branch has not diverged and there should be a linear path between the branches that we wanted to merge.

When there is not any linear path between the two branches, then Git will join those two branches by using the extra commit, so this is called a three-way branch

We had learned the basic concepts in branching and now, let's do some actual branching, committing and merging.

Now, I can merge in my changes, type git merge and then the name of the branch you wanted to merge into the current branch git merge title-change

And now, Git will respond as merging is successful and updating and also you can see the HASH code of the commits which are involved in the merging.

Git also tells that, It was a Fast Forward merge and the file which is involved is simple.html, and there was a "1 file changed, 1 insertion(+), and 1 deletion(-), the way that Git sees a change on the same line is a line deletion and line insertion at the same place called Fast Forward Merge.

Let's do git log --oneline --graph --decorate , you can see that the HEAD is pointing to the last commit on the master branch and also to the title-change branch and master is currently pointing to that commit as well.

We know how to do a Fast Forward merging in Git, now, let us understand how to disable the Fast Forward Merge in Git and follow the below instructions:

In this part, there will be an automatic merge that will result in a merge commit automatically, The first thing is to, go to your project folder and then get into your Git repository.

Here I have my starter-web-1/ repository, just check for git status, before moving forward. Git tells us that we are on the master branch with a clean working directory.

Let's go ahead and edit some files in that separately, Start with a humans.txt file, open humans.txt by using the default editor and add some Team information details under the Team and save then exit. 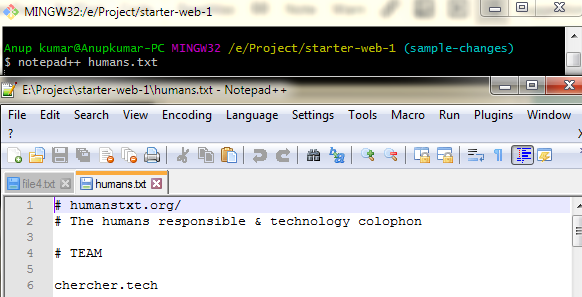 Let's go ahead and edit the README file and add some text under the "How to Contribute" as "please fork Git repository and then issue the pull request for review" save and then exit.

If you check by using the git log command git log --oneline --graph --decorate --all . You can see that the merge has happened and we have our commit message too, but the sample-changes is still preserved as a separate branch.

Deleting a File in Git

How to Resolve Merge Conflict in Git

In this section am going to cover, how to resolve merge conflicts, most of the time, we will end up doing Fast Forward merges, or

Merges that could result in Fast Forwards or else Git is going to merge automatically however, sometimes we are going to run into the conflicts and need to resolve them. Now let us follow as below.

And hence Git will change out all the files that are in the working directory to reflect the current state of the branch you are going to.

Hence I switched back and forth between different branches or different references within Git. Git is managing my working folder for me.

So let us make some additional changes that are going to create conflict and add the title as A very powerful website.

We have made some more changes to the simple.html file, and these changes should conflict the other changes I made in another branch. Here, the first thing we can observe that Git trying to merge simple.html automatically but it could not do that instead resulted with conflict in the content as Automatic merge failed.

We have to fix the conflict, here we are merging against the master, so we are in the merging state. Neither we do not have a clean working directory nor in the staged area, we are in between the merging.

Let's go ahead and have look at the simple.html, you will recognize differences, probably if you are familiar with the other source control tools that are popular in the Linux or Unix. Then go ahead and modify the file manually, earlier we set up the visual diff and mergetools so that we could do this with a graphical tool.

So, to invoke our graphical tool, to help resolve our merge conflict, type git mergetool, and that will launch the p4merge, P4Merge is a pretty nice three-way mergetool, that we can use to resolve the conflicts. Push Changes Back to Github

We have reached the end point of Branching and Merging, so let us clean up the working directory and push the changes back to the Github.