Deleting a File in Git

Deleting a file in Git using the different Git commands and Committing the changes to the local repository.

Let's start with a Demo as shown below with examples:

Open the Git bash terminal and check whether you are in your project folders directory or not. You can see a starter-web-1 folder, cd into it and do an ls, you can see all your files inside the Git repository. Check for git status, Git tells you that, you have a clean working directory. So, here am going to show you how to delete a file which has not been tracked by Git. So we use Git rm commandgit rm simple.txt, we will use this command for removing the file and specify simple.txt.Git will throw an error that the file simple.txt doesn't match any file, this is because this file has not tracked by Git.

Hence, we will use an operating system facility to delete the file directly. Here am using bash command rm with the file name as rm simple.txt 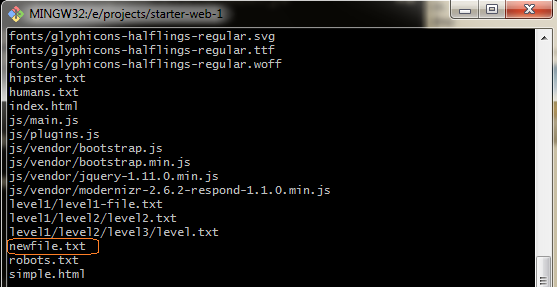 The command "reset HEAD" specifying the file hipster.txt is missing from the working directory. just unstaging the file doesn't mean that it will restore the file back to file system.

And hence we need to discard the changes we have made to the working directory by using git checkout command as git checkout -- hipster.txt and press enter. 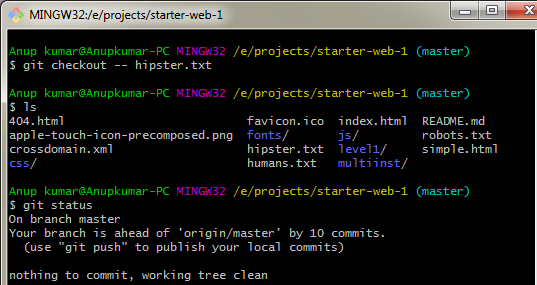 In this example, you can delete a file using a command line or by using a file manager, I will use bash command instead of git command to delete the file.

So let's do that rm hipster.txt and press enter and do an ls, the hipster.txt file has no longer listed in the working directory.

And hence Git will replay as not staged for commit, We can fix this by using git add -A command, where -A will add and update any changes to the working directory including rename and deletion staged.

Let's do an ls, you can see that there is a level1 directory. Level1 contains several files and folders recursively, so in this case, I want to remove entire file structure, so am going to use the bash command rm -rf.

As rm -rf level1 where -r recursively walk into the folder structure and -f will force the deletion, Now do an ls, you can see that level1 is no longer listed here