Setting a Git Repository for Comparisons

First, we will set up our Git Repository to demonstrate different types of comparison scenarios.

So let's create it by using the default text editor notepa++ README.md, as indicated by the.md, it's a markdown formatted file, which is a glorified text.

Now am going to add some text in the README.md file, am going to give heading as the starter web project and followed by Introduction, Purpose and How to Contribute and then save and exit. The p4merge is actually very much useful in Comparing the different area of Git repository, what has been modified and what is there in the staging area.

As we know already that we have configured Git with Difftool command, hence by using the Difftool now, we can compare the Working directory with the staging area.

Let us see how it works:

So here, in my case being in my project folder lets go to my repository cd starter-web-1/, If you do a git status, you can see that your working directory is not clean and you have modified the README.md file many times and hence your README.md file is in an unfinished state.

If I type git diff without any parameter, git replies by comparing the difference between the working directory, that has been recently modified but not yet staged and whats currently staged.

Now press "q" and exit then you will be prompted back to the git terminal, as you know, in the previous article we have configured visual merge and difftool set up with Git.

So if I use difftool command then we can visually see the changes, Pass git difftool and press enter, Git will launch a visual difftool for us, so now we can easily compare and see the changes we have made.

On the right hand, is our working directory that has been modified recently and on the left-hand side is what has been currently staged. So I have my p4merge has a visual difftool, which requires me to completely quite before I return to the command prompt.

Once you close the visual merge dialogue box, Git will automatically take you to the Command prompt and then you can move further.

So if we pass the command as git diff HEAD, using the pointer reference "HEAD" as a parameter, git will Compare the difference between the working directory and the Last Commit. We have added some couple of sentences in each section. Let's do git difftool Head, git difftool command will use the same parameter as the git diff command, Now you can see with p4merge, the two sentences we have added at the different section of the README.md file

So again the right-hand side is the working directory and the left-hand side is a temporary file, that represents the state of the file on the last commit on the current branch Adding Git To An Existing Project

So let us know the difference between the what has been staged and the last commit on the current branch.

So by using git diff --staged HEAD, we may know the difference, Here we are comparing the staged area to the HEAD. of course, HEAD means the last commit on the current branch and at last press "q" to exit. 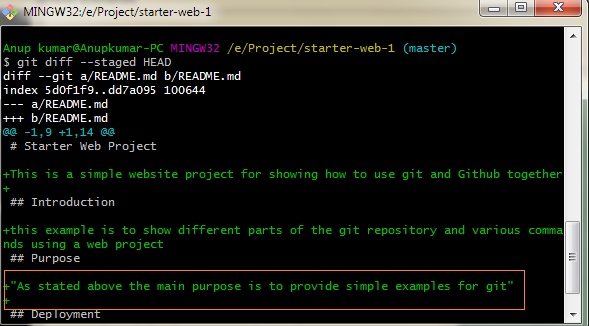 So the above showed line is the last line which is added to the staging area, that is actually not present in the Git Repository.

Let us see the changes visually by using the command git difftool --staged HEAD , Well again, on the right side you can see our staged files and on left-side the last commit on the current branch. Limiting the Comparisons to OneLine or Path

Sometimes our Diffs involve multiple files in that and hence you can limit that search to just one file.

Comparison Between the Commits

So far we know the differences between the working directory, staging area, and the last commit, now let us compare an arbitrary commit with the last commit.

Let us consider the commit id in the middle and with the git diff command you can specify two arbitrary points to compare.

So git diff ref1 and ref2 where the ref1 is the commit id from the middle and the ref2 is the last commit id which is nothing but HEAD and press enter, you can see the difference between all the changes that had happened across several files from the last commit. Moving and Renaming Files in Git

Comparison Between the Local and Remote Master Branches

In this part, am going to show you the difference between the two branches, Since we have not created any branch on the Git repository that currently we are working on.

So I am going to show you the difference between the Local Master branch and the Remote Master branch, where both are working the same.

You can observe that the above red color lines don't exist on the Git repository, they are the difference between the what's been committed in the master branch and what has been pushed up to Github. 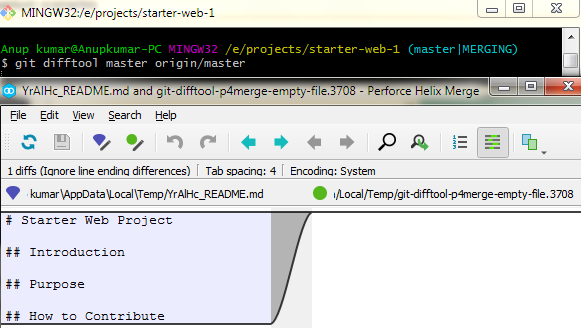 Setting up alias within Git

Comparison Section cleanup and Push back to Github

We are on the end part of the comparison section, So, let us clean up before we move on.